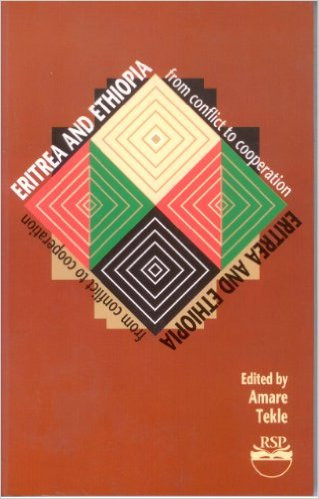 ERITREA AND ETHIOPIA:From Conflict to Cooperation grew out of discussions by Eritrean and Ethiopian scholars in 1989—two years before the victory of the Eritrean and Ethiopian liberation forces. The scholars came from different backgrounds and political orientations, and were therefore, expected to hold conflicting views. However, all who attended the meeting agreed that Eritrean independence could be the catalyst for bringing an era of cooperative relationships in the Horn of Africa.

The major objective of the book is to evaluate the conditions and relationships of all the countries in the region in the hope of identifying the root causes of conflict and making recommendations based on: elimination of the causes of conflict; inauguration of a durable peace with justice, freedom and equality; and the creation of a cooperative relationship between Eritrea and Ethiopia as a first step for the creation of a Horn of Africa Community.

Eritrea and Ethiopia have the best potential to start the great movement to create a stable, peaceful and cooperative order in the Horn of Africa, if only because the two have, even during the last three dark decades of forced and unhappy partnership, developed a rudimentary economic relationship that ties them together which can, with a little restructuring, be geared to mutual advantage. It is proposed that Eritrea and Ethiopia constitute a core in a Horn of Africa system. If we accept that, and the additional proposal that the Horn of Africa itself forms a distinct system in international relations, then relations within the core, and indeed the larger system, must be premised on the shift from one type of integration to another -- i. e. from the hegemonism of empire to free association in a political community. A fully integrated community can be achieved only upon the acceptance of a pluralistic integration process. This collection of essays addresses the prospects and problems in the process of creating a single, integrated community in the Horn of Africa.

Dr. Amare Tekle, the editor, and a political scientist, is now a member of the Election Commission of South Africa, and was the Referendum Commissioner of Eritrea.