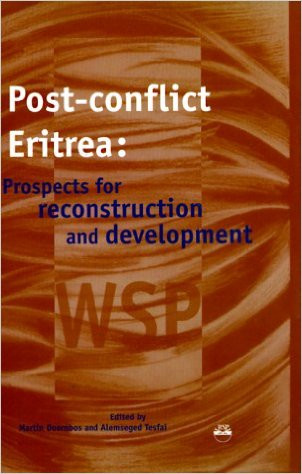 This book presents research findings on key areas of post-war reconstruction in Eritrea, a country that has emerged from prolonged and profound conflict. The research was undertaken as a collective exercise by participants in the War-torn Societies Project (WSP). This is an innovative action-research project set up in 1994, whose main aim was to help local and international actors in four pilot countries to clarify policy options for development and reconstruction and, in the process, to learn about the role of international assistance and about peace-building in general.

The Eritrea participants in the WSP exercise chose to focus research and debate on five broad priority area: the challenge of social reintegration, infrastructure development, food security, human resources development, and basic questions of governance. Each of these topics was the subject of research and then extensive debate in the working groups formed as part of the project. Apart from its value in driving the process of debate and relationship-building central to the consolidation of peace, the research has wider interest and relevance for all those interested in the post-war development of Eritrea. The findings brought together in this volume are completed by an introductory chapter and a concluding analysis of substantive and conceptual issues raised in the course of research.

Alemseged Tesfai, who until 1997 was the Actin Head of the Eritrean Land commission, writes on the history of Eritrea and the Eritrean People's Liberation Army. He was Head of the Cultural Division of the EPLF and the Cultural Centre of the Department of National Guidance in the Provisional Government of Eritrea. A writer and playwright, Alemseged has produced a collection of short stories, plays, essays and a novel about the Eritrean Liberation War. His play The Other War was produced in the West Yorkshire Playhouse, Leeds, UK, in September 1997.

Martin Doornbos is Professor of Political Science at the Institute of Social Studies, The Hague, Netherlands, and was associated with the War-torn societies Project from 1995 to 1998. He has written on political transitions in the Horn and East African region generally. Doornbos was a member of the International Advisory Board for the Constitutional commission of Eritrea.