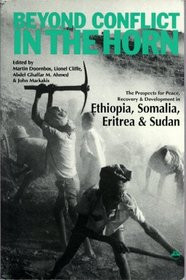 There is now some hope for an end tot he conflicts which have devastated the Horn of Africa for the past thirty years.

In February 1991 the repressive regime in Somalia gave way to a painstaking process of building a coalition based on consensus. In May 1991 the military regime of Mengistu in Ethiopia was toppled and his army disbanded; the various opposition groups and national minorities are, for the moment, co-operating to build a democratic regime; Eritrea's long war for self-determination has finally ended. Sudan and Somalia are still beset by conflict and their instability could spill over tot eh neighboring countries.

Peace has its own challenges. Millions of displaced people need to return home. Combatants and war victims will have to be rehabilitated. Famine relief will have to continue under quite different circumstances.

Peace allows the countries to think about long-term economic development, food security, the reversal of environmental decline and the resumption of internal and cross-border trade. Will the opportunities for regional co-operation be seizes and the tensions between states by overcome?

This book is the first comprehensive assessment of the requirements for recovery and development in the Horn following the cessation of conflict. It is a concerted effort by experts from the countries themselves, by international specialists and by representatives from NGOs to address the problems of the region. This timing of these thoughts about building peace could not be better. The challenge of this agenda is enormous.