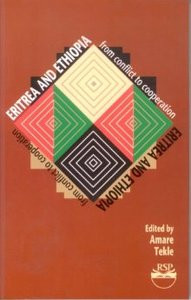 Eritrea and Ethiopia: From Conflict to Cooperation grew out discussions by Eritrean and Ethiopian scholars in 1989-- two years before the victory of the Eritrean and Ethiopian liberation forces. Thee scholars came from different backgrounds and political orientations, and were therefore, expected to hold conflicting views. However, all who attended the meeting agreed that Eritrean independence could be the catalyst for bring an era of cooperative relationships int he Horn of Africa.

The major objective of the book is to evaluate the conditions and relationships of all the countries in the region in the hope of identifying the root causes of conflict and making recommendation based on: elimination of the causes of conflict; inauguration of a durable peace with justice, freedom and equality; and the creation of a cooperative relationship between Eritrea and Ethiopia as a first step for the creation of a Horn of Africa Community.

ABOUT THE EDITOR
DR. AMARE TEKLE, the editor, and a political scientist, is now a member oft he Election Commision of South Africa, and was the Referendum Commissioner of Eritrea.