WITHOUT TROOPS AND TANKS: Humanitarian Intervention in Ethiopia and Eritrea, by Mark Duffield & John Prendergast (HARDCOVER) 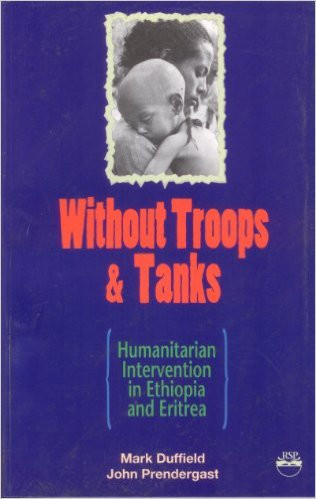 WITHOUT TROOPS AND TANKS: Humanitarian Intervention in Ethiopia and Eritrea, by Mark Duffield & John Prendergast (HARDCOVER)

Humanitarian Assistance in times of war has become an issue of growing concern. The 1980's has been a decade of major policy change. It has seen the pendulum of international opinion swing from non-interference to the acceptance of humanitarian intervention. The Emergency Relief Desk (ERD) spans this period of change. It was formed as a church based non-govermental (NGO) consortium in 1981 to channel relief aid across the Sudanese border into war torn Eritrea and Tigray. It was a responses to a donor community which supported the Ethiopian government and was indifferent to the plight of civilians in contested areas. After the mid-1980's, as attitudes changed, ERD became a major conduit for international humanitarian aid which flowed into areas held by the Eritrean and Tigrayan liberation movements.

"It is a moral imperative to do our utmost to help vulnerable communities threatened by disasters and conflicts. The impressive cross border operations into war and hunger stricken Eritrea and Tigray, are examples of how effective relief can be undertaken during even the most unfavorable conditions."
—Jan Egeland,
State Secretary, Norwegian Ministry of Foreign Affairs

"I would strongly recommend this document to be read by all students of, and practitioners in humanitarian operations, especially those concerned with humanitarian operations in zones of conflict. Some of the views expressed may be controversial by the enormity of the humanitarian task carried out by the ERD and their achievement in getting food to the needy in Eritrea and Tigray comes across loud and clear."
—Susie Smith, OXFAM

"This thoughtful review asks the tough questions and provides constructive, if controversial and unsettling, answers. It contains an wealth of data, enriched by thoughtful analysis. Private relief groups are to be commended for commissioning an independent study of their work. The result should be 'required reading' for all humanitarian organizations committed to functioning effectively in internal and armed conflicts, in Africa and beyond."
—Larry Minear
Co-Director, Humanitarianism and War Project
Author of Humanitarianism Under Seige