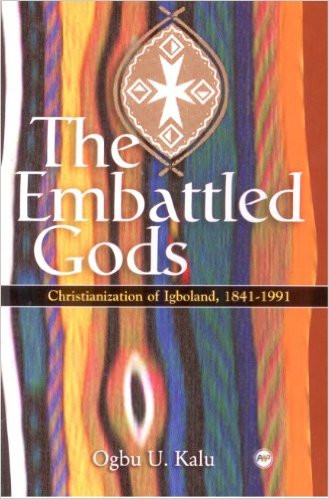 The Embattled Gods: The Christianization of Igboland 1841-1991 has three concerns: the first is to serve as a handbook on how to do church history in an African context. The story of the presence of the gospel in many African communities must be told in such a manner that it is the people's history on how, when and where the rain of the gospel met them and how they responded. It starts from their cultural backgrounds and contours through the patterns of the insertion of the gospel to the challenges of the new change agent to the ingredients of Igbo worldview, culture and religious traditions. The book starts with a discussion of church historiography. Researchers will find the discussion on history, ideology and methodology useful. There is rejection of Euro-centric historiography and yet a critique of nationalist historiography. The author advocates in irenic, ecumenical history that searches the memory of the people and empowers their future. The past has uses for the present. From here the book reconstructs a profile of the Igbo and their gods. The relationship is a strong one and the indigenous symbols are not museum pieces. The rights of passage, the agricultural cycle and festivals embody an alive universe.

The second goal of this book is to reconstruct from a vast array of sources and multidisciplinary resources the vertical and horizontal patters of the coming of Christianity into various parts of Igboland. A culture area approach breaks Igboland into subculture theatres and explores the connection between ecology and religion Socio-political, economic and other cultural forces shape the forces the fortunes of Christianity even as the power of the gospel essays to transform these. The goal is to explain why different parts of Igboland responded differently to Christianity. A statistical analysis of a sample of 615 deities of Igboland shows that culture theatres established different religious structures and offered varied challenges to the core of the gospel. Why have the Igbo people of southeastern Nigeria appropriated the resources of Christianity with such great enthusiasm even as this force embattled the covenants with the gods of their fathers? The matter of religious change is a large one precisely because at the end of every story is the question, so what? The historian avoids the cardinal sin of monocausal analysis and so the various approaches are canvassed and a case study employed in demonstrating how Christianity experiences a new cultural setting raising new questions and receiving new answers in Igboland. Is there an Igbo Christianity?

A third goal is exploring the new dimensions to Igbo Christianity in the post Civil War period. Many accounts tend to deal with the past that was dominated by missionary impulse. The explosion of contemporary Christianity is demonstrated by analysis of the spiritual revival that occurred in the 1970's and whose effects are still with us. That revival webbed the import of other cultural changes in religion and education. The gods in Igboland have become increasingly embattled and yet resilient. Many have written aspects of Igbo church history. This is the first holistic account.

Ogbu Uke Kalu served as professor of Church history for over two decades at the University of Nigeria, Nsukka. During the period he was also visiting professor at several internationally renowned institutions including the Harvard Divinity School and the Center for the Study of World Religions, Bayreuth University in Germany and the University of Edinburgh. He is widely published, with 14 books and over a hundred articles in edited volumes and scholarly journals to his credit. Prof. Kalu is currently the Henry Winters Luce Professor of World Christianity and Missions at McCormick Theological Seminary, Chicago.