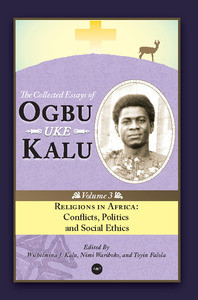 This volume collects together Kalu’s insightful essays on the intersection of religion and social issues in Africa. They constitute an engaging set of political and ethical analyses of the ?ow of events as Christianity penetrated Africa and sustains itself it multiple forms. It is an illuminating, informative, and and provocative commentary on religion in African public spaces. It is also a constructive study of how religion a?ects public life, engaging the debate on how primal religions frame the outworking of the social ethics of African Christians and Muslims. In this set Kalu displays the sensitivity of a great historian coupled with an eye for ethical issues.

ABOUT THE EDITORS
Wilhelmina J. Kalu (Nee Dowuona-Hammond) has a PhD in Educational Psychology with interest in Special Education. She taught at the University of Nigeria, Nsukka until 2003, and recently as Adjunct Faculty at McCormick Theological Seminary and Center for African American Theological Studies in Chicago as well as other courses at the Progressive Bible Institute, Chicago. She is a member of several International Associations and served on Boards, including the International Council of Psychology (ICP), Commission on Education, World Council of Churches, Geneva, and the International Council of Pastoral Care and Counseling. She was President of the African Association for Pastoral Studies and Counseling for several years until 2005. She is engaged in ?nding non-traditional ways of teaching and mentoring Women and Youth in relationship. She has over 65 publications. Dr. Kalu is widow of late Prof. Ogbu U Kalu and has four children.