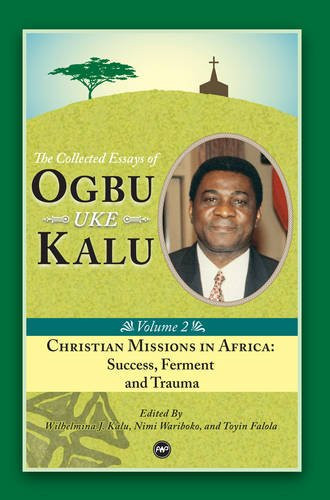 The narratives and analyses in this volume will enable scholars of global Christianity to discern how the shifting center of gravity in Christianity is being played out in Africa. Kalu does not simply record demographic shifts, numerical growth, and vitality of African churches, but also and importantly shows how the expressions of Christianity are filtered through African cultures.

Wilhelmina J. Kalu (Nee Dowuona-Hammond) has a PhD in Educational Psychology with interest in Special Education. She taught at the University of Nigeria, Nsukka until 2003, and recently as Adjunct Faculty at McCormick Theological Seminary and Center for African American Theological Studies in Chicago as well as other courses at the Progressive Bible Institute, Chicago. She is a member of several (ICP), Commission of Education, World Council of Churches, Geneva, and the International Council of Pastoral Care and Counseling. She was President of the African Association for Pastoral Studies and counseling for several years until 2005. She is engaged in finding non-traditional ways of teaching and mentoring Women and Youth in relationship. She has over 65 publications. Dr. Kalu is widow of late Prof. Ogbu U. Kalu and has four children.

Nimi Wariboko is the Katherine B. Stuart Professor of Christian Ethics at Andover Newton Theological School, Massachusetts. He is the author of ten books, including The Depth and Destiny of Work: An African Theological Interpretation (2008), God and Money: A Theology of Money in a Globalizing World (2008), and The Principle of Excellence: A framework for Social Ethics (2009)
Toyin Falola is the University Teaching Distinguished Professor, University of Texas at Austin and the Mwalimu Nyere Chair of Modern African History, Benue state University. He has authored and edited over a hundred books, many of which are published by the Africa World Press.
CATEGORIES:
Religion, History, Africa