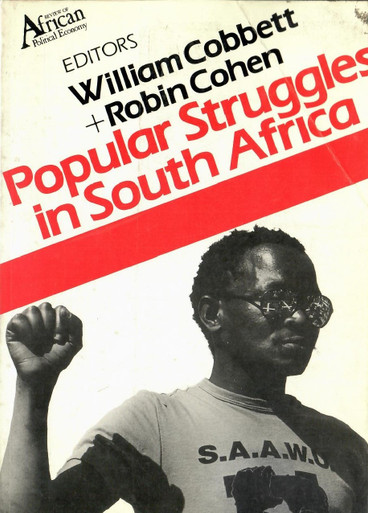 People have taken the initiative in the workplace, in the community and in the places where black South Africans are consigned to a second-class education. This is the level of reality beneath the posturing of a white electoral politics as the miners’ strike of 1987 has shown.

Popular Struggle in South Africa has an urgency and relevance rare among academic books. Nearly all the contributors are close to the sites of encounter and resistance they are describing. At the same time they and the editors place the individual cases within the historical context.

‘Popular Struggle or One Struggle?’ The book starts with a strongly argued and seminal discussion of this question by William Cobbett and Robin Cohen. And the final chapter is a substantial assessment by John Saul of ‘class, race and the Future of socialism in South Africa’.

ABOUT THE AUTHORS
WILLIAM COBBETT, of the University of the Witwatersrand, has been working at the center of Ethnic Relations, University of Warwick.
ROBIN COHEN is Executive Director of the Center and Professor of Sociology.