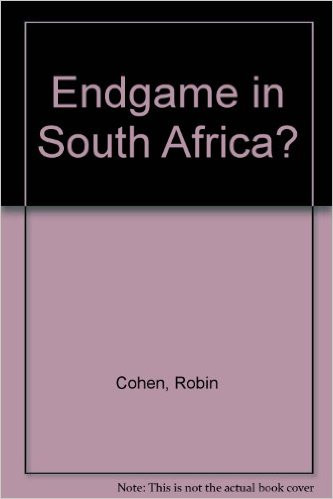 These are the four pillars of apartheid. If white political power is dislodged will the thriee other pillars now actually crumble?

This book, which is published on the tenth anniversary of the Soweto rising, gives a brisk analysis of the ideology of apartheid and relates it to the key social institutions and pracitices. Students in particular will find useful the reading guide and bibliography.

Professor Cohen reaches beind the ideological pronouncements to establish a somewhat sobering prophecy that there may well be more continuity that many people would expect. There are elements of stasis in the social structure that are so deeply embedded that quite major ideological and political shifts will not easily dislodge them.

Robin Cohen is Professor Emeritus of Development Studies, University of Oxford. He was Professor of Sociology at the University of Warwick and served as Dean of Humanities at the University of Cape Town (2001-3). He has held full-time teaching appointments at the Universities of Ibadan, Birmingham and the West Indies and short-term appointments at Stanford, Toronto and Berkeley. He is editor of the Routledge series on Global Diasporas, the Elgar International Library of Studies on Migration and the Cambridge Survey of World Migration.
He is author of 9 books, co-author of 1 and editor/ co-editer of 20 further volumes. He writes on on the sociology and politics of developing areas, ethnicity, international migration, transnationalism, creolization and globalisation.