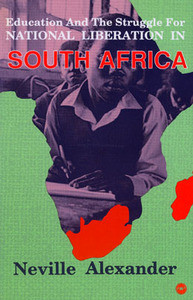 "The following essays and speeches have been selected from among numerous attempts to address the relationship between educational and the national liberation struggle. All of them were written or delivered in the period 1985-1989, which has been one of the most turbulent periods in our history, more especially in the educational arena.

For, if there is one feature of the current intellectual environment in South Africa which ought to concern those who are bending their minds to the 'post-apartheid' era (however we define that), it is the lack of serious debate." -Neville Alexander

ABOUT THE AUTHOR
NEVILLE ALEXANDER is also the author of Sow The Wind.