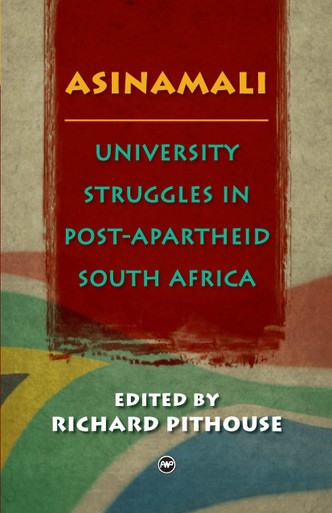 Asinamali is an edited collection of essays that includes work by Dennis Brutus, Shereen Essof, Jonathan Jansen, Mahmood Mamdani and Andrew Nash. It is a project of the Committee for Academic Freedom in Africa (CAFA).

Asinamali marks CAFA's first enquiry into academic freedom in post-apartheid South Africa. Asinamali means 'We have no money' and is a phrase that was often sung in the struggles against apartheid. A key demand of the struggles against apartheid was, in the famous words of the Freedom Charter adopted at the Congress of the People in 1955, that 'The Doors of Learning and Culture Shall be Opened". But in the ten years since the end of apartheid the South African university system has been rapidly commodified with the result that students who are poor are increasingly being excluded from university education, often at gunpoint, and research and teaching are once again being organized in the interests of elites. But the commodification of education in post-apartheid South Africa has been vigorously contested by student struggles. Thus the old language of resistance is back on South African campuses.

The essays collected here cover a range of themes including the struggles to decolonize curricula, the nature and impact of the steady corporatization and commodification of universities and the student resistance to the exclusion of poor students from universities.

Student struggles are central to this book and it develops particular analysis of the post-apartheid history of one formerly black universityThe University of Durban Westville (UDW)and one former white universityThe University of the Witwatersrand. In both cases broader community-wide social movements against commodification have emerged from or with campus struggles. During a peaceful campus demonstration of students who were demanding the right of access to UDW the police murdered Michael Makhabane on May 16, 2001.

There have been many deaths on African campuses consequent to struggles against neoliberalism. Often these deaths pass into history unmarked by anyone other than friends and family. However CAFA has taken these deaths seriously and has accorded them due dignity by seeking to explain the reasons for student protests and what is at stake when the institutions of contemporary imperialism reorganize African education in the interests of their neoliberal project. Asinamali is written in this spirit.

ABOUT THE EDITOR
RICHARD PITHOUSE is a research fellow at the Centre for Civil Society at the University of KwaZulu-Natal in Durban.