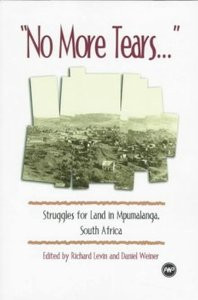 Three years after South Africa's first non-racial democratic elections, the difficult process of social and economic transformation continues. About one-half of South Africa's approximately 43 million people-and two-thirds of its African population-still live in deep poverty. At least seven million live in shacks. Land hunger is widespread. Land dispossession caused by colonial-and apartheid-forced removals and alienation of land and water rights lie at the heart of the repressive regime which the national liberation movement struggled against.

In South Africa, land and agrarian reform policy is presently being developed as a top down exercise increasingly informed by a neo-liberal macroeconomic policy orientation. In the book, this elite driven transition is contrasted with a proposed popular program of radical transformation. The specific role of the World Bank is criticized, and the results of a uniquely participatory research and policy development project recently undertaken in Mpumalanga Province (formerly the Eastern Transvaal) are presented. The book demonstrates why incorporating indigenous local knowledge already "at work" in poor rural areas into development of land and agrarian reform policies is essential for truly democratic social and economic transformation. This is an important book that will be useful for policy-makers, academics and the general public alike.

ABOUT THE EDITORS
RICHARD LEVIN is an associate professor of Sociology at Witwatersrand University in Johannesburg and has published extensively on society, politics, and land in South Africa and Swaziland. He received his Ph. D, in Politics for the University of Liverpool, England.

DANIEL WEINER is an associate professor of Geography at West Virginia University and received his Ph. D, in Geography from Clark University. He has written extensively on rural development in Kenya, Zimbabwe and South Africa. His research includes energy use in Agriculture, the political ecology of land use, and geographic information systems (GIS0 and society.