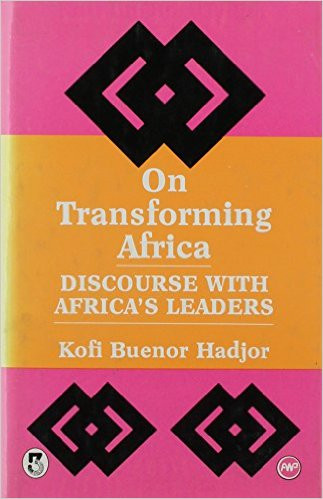 Hadjor argues that with Africa on the verge of a historic disaster, silence would be crominal. Written as an indictment of African leadership, On Transforming Africa: Discourse with Africa's Leaders attempts to provide an explanation of the failures of the past. It does this in uncompromising terms so as to force all the embarassing issues out into the arena of public discussion.

"Hadjor's book is compulsory reading for young Africans who need to be resuced from lethargy and cynicism which are now threatening to dominate Africa. Discourse  is timely and offers our youth a guide to needed action."
—Abdulrahman M Babu—

"Kofi Buenor Hadjor has the knowledge and experience to ask the right questions, the courage to put these questions plain and squarely, and the intellectual power to point to where the answers can be found. It is no accident, in my opinion, that he places himself in the African tradition of Amilcar Cabral and other pioneers who were always convinced that Africa can and will find its own necessary solutions to its own problems. Neither naive nor rhetorical, Hadjor's findings in Discourse demand to be read, and being read, acted upon."
—Basil Davidson—

Kofi Buenor Hadjor  is Publisher/Editor of Third World Book Review and other publications. McGill, Standford and Oxford are among the universities at which he has studies. Hadjor was press aide in the pulicity secretariat of the late President Kwame Nkrumah of Ghana. He represented Ghana on the Permanent Secretariat of the Cairo-based Afro-Asian People's Solidarity Organisation (APOSO). He has taught at several universities in Africa, Canada and the US. He was UNESCO's Communications Advisor to the government of the Tanzania School of Journalism. He was editor of New African, a leading news magazine on Africa.