LOOKING OVER THE ABYSS: THE US AND EUROPE BEYOND CAPITALISM By Steven Colatrella 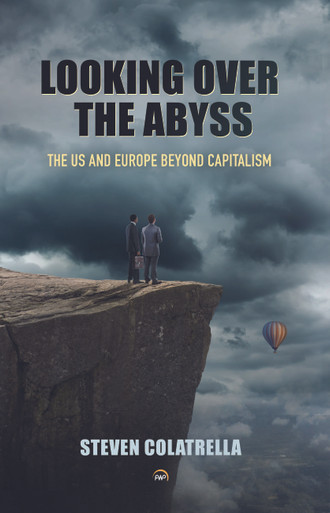 LOOKING OVER THE ABYSS: THE US AND EUROPE BEYOND CAPITALISM By Steven Colatrella

Europe and subsequently the United States rose to power and wealth along with the rise of capitalism. But capitalism has now shifted its attention to Asia, even as the conditions of ordinary workers in Europe and North America decline, and the political influence of the West wanes. This book argues that only by breaking decisively with capitalism, and aligning themselves with the majority of the world’s people against exploitation, can the peoples of Europe and the United States save their societies. They must look not into the abyss where capitalism now proposes to plunge them, but over the abyss, over the horizon of capitalism, to an alternative present and future beyond capitalism. This work proposes concrete steps that can be taken to change institutions to move beyond capitalism, and helps to clarify the meanings of key concepts such as the State, Nations, Internationalism, Capitalism, Corporation and Class in ways that are practical and useful for social change.

This is an original, insightful and important discussion of the capitalisms found in Europe and North America and the abyss they face against Chinese competition. I found especially  valuable Colatrella’s analyses of the different political histories, even sociologies of  Europe’s and the US’s different capitalisms. The inability of either to compete with the low standard-of-living capitalism, now developing particularly in China, has already created the socio-economic conditions for the rightist, anti-democratic ‘strong men’ now prospering  in the rest of the capitalist world. For Colatrella, a renewed socialist advance, which he well if briefly characterizes, is the way out of this abyss.

—John McDermott is the author of Restoring Democracy to America and Employers' Economics versus Employees' Economy.

Steven Colatrella is a longtime activist and college professor who has taught at many institutions in both the United States and Italy. He is the author of a book on globalization and immigration, Workers of the World: African and Asian Migrants in Italy in the 1990s, (Africa World Press: 2001) and has published articles and essays on capitalism, corporations, global governance and class. He lives in northern Italy.