CHRISTOPHER COLUMBUS AND THE AFRIKAN HOLOCAUST: Slavery and the Rise of European Capitalism, John Henrick Clarke 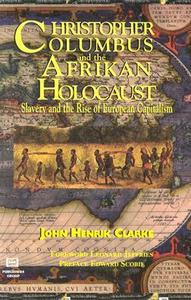 CHRISTOPHER COLUMBUS AND THE AFRIKAN HOLOCAUST: Slavery and the Rise of European Capitalism, John Henrick Clarke

"Professor Clarke's analysis provides us with a perspective that lets us understand that slavery and genocide were institutionalized and systematized into a global system of domination, destruction and death which not only control land, labor and resources, but colonialized information." Dr. Leonard Jeffries

"Dr. Clarke has examined the colossal dehumanizing of a people with minute detail, step by step and his chronicles reveals that the African Holocaust was the greatest single crime in the world committed against a people. Nothing else can match this massive genocide and destruction." Dr. Edward Scobie

"The Middle Passage, our Holocaust! It is our holocaust because this is a holocaust that started 500 years ago and it is not over. We do not start our count at six million, we start at sixty million, and we have just begun to count. Now I don't mean to negate the German and the European holocaust. Whether the number was six or sixty million, even if it was wrong. But it was a problem started in Europe by Europeans. There was no comparison between this tragedy and our tragedy which was the greatest crime in history of the world. Why haven't we memorialized our dead? It was almost like the crime of not burying them." Dr. John Henrik Clarke