GLOBALIZATION AND URBANIZATION IN AFRICA, Edited by Toyin Falola and Steven J. Salm 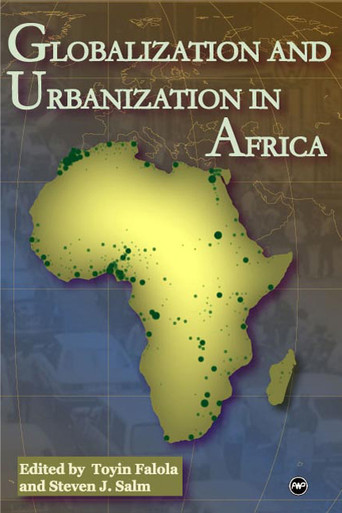 GLOBALIZATION AND URBANIZATION IN AFRICA, Edited by Toyin Falola and Steven J. Salm

Scholars present new interpretations of African cities, from the pre-colonial to the modern, set in the context of national and international economy, politics and culture. While providing insights into the evolution of African cities, they also raise issues of vital importance to the survival of African cities. The chapters capture the mixed legacies of colonialism and the lingering consequences of neo-colonialism in a so-called age of globalization.

Despite the adverse conditions created by colonialism, Cold War politics, orthodox structural adjustment policies imposed on Africa by the Bretton Woods institutions, post-independence authoritarian regimes and military dictatorships, and the new globalization, the books shows that African towns and cities remain vibrant and viable centers for knowledge creation, economic innovation, and experiments in social relations and peaceful coexistence of diverse groups. The contributors to this important volume also provide a critical analysis of the impact of globalization, including colonialism and other external influences, on the development of urban centers, as well as urban life in the continent. This book explores ways in which public policy can be used to enhance the viability of urban centers and improve their ability to continue to serve as centers of excellence.

ABOUT THE EDITORS
TOYIN FALOLA is Frances Higginbotham Nalle Centennial Professor of History at the University of Texas at Austin. He has authored and edited numerous books and scholarly works including "Tradition and Change in Africa: The Essays of J.F. Ade Ajayi" and "The Journal of African Economic History" (AWP 2000). Prof. Falola has been the recipient of various awards and honors, including the Jean Holloway Award for Teaching Excellence and the Ibn Khaldun Distinguished Award for Research Excellence. For his singular and distinguished contribution to the study of Africa, his students and colleagues have presented him with a Festschrift edited by Adebayo Oyebade, "The Transformation of Nigeria: Essays in Honor of Toyin Falola."

STEVE SALM, Ph.D., teaches in the Department of History at Xavier University, New Orleans. He has conducted fieldwork in several West African countries, focusing on 20th century urban history and culture. He has presented research papers at major conferences, and published chapters and articles on a wide range of topics such as gender, youth, music, literature, religion and popular culture. His writings have appeared in "Africa Today" and "African Economic History," as well as various other renowned scholarly journals. Two of his recent books are "The Culture and Customs of Ghana" and "Nigerian Cities" (co-edited with Toyin Falola).