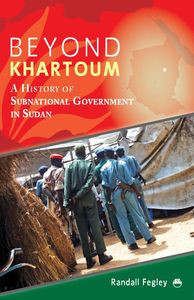 Useful to both scholars and policymakers, Beyond Khartoum is a history of subnational government in Sudan from early times through 2010. Despite domination by its Northern Arabic-speaking elite, Sudan has a long and varied history of governmental organization at subnational levels, compared with most African and Middle Eastern states. In a highly charged atmosphere of regional pressures, economic disparities and ethnic and religious difficulties, significant demands for subnational recognition and participation have often challenged the centralized uniformity of numerous regimes, both authoritarian and democratic. This work describes the contexts and structural features of Sudan’s past systems and presents comparisons with other African systems, current options and future alternatives.

Looking at the interactions of governmental units, political leaders, administrators and various segments of the public, this book notes three reoccurring themes. First, the Sudanese polity has swung back and forth between centralization and decentralization. Second, external influences have profoundly affected sub-national politics. Finally, the interlocking issues of trust, function, poverty and conflict are problems that have shaped all Sudanese systems. Cases studies of two marginalized areas, the Northern Region in the early 1980s and Kajo Keji County in 2004, are used to illustrate and exemplify these issues.

With more than 2.5 million Sudanese killed in conflicts over the past half century, such an inquiry has become increasingly relevant and urgent, as significant changes in power relationships and policies have become unavoidable. Given Sudan’s pivotal position in regional conflicts, its cultural diversity, its past instability and more recent oil wealth, an understanding of subnational politics is essential to fully appreciate the dynamics behind the news emanating from Khartoum, Darfur, Southern Sudan and beyond.

Randall Fegley, who ispolitical historian at Pennsylvania State University’s Berks College, specializes in the study of mass trauma, especially long-term conflicts, gross human rights violations and prolonged disasters in Rwanda, Equatorial Guinea, Uganda and Sudan. He lived, taught and completed Ph.D. research in Sudan from 1980 to 1984 and has returned to work there and in other African countries numerous times. He has served in leadership roles in the Sudan Studies Association and Episcopal Church bodies active in Sudan.