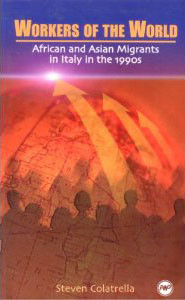 This book traces the link between globalization and world migrations. In examining the expropriations of people’s resources carried out through structural adjustment, it shows how migrant communities from various nations have used migration as a strategy to counter the forces of structural adjustments, and how, in doing so, they have created a vast network of transnational linkages. Colatrella further demonstrates how in the often neglected case of Italy, immigrant communties have inserted themselves into new forms of work and have become crucial workers in export production. In Italy, immigrants have also been engaged innovative struggles for a revival of the working class and leftist movements. After examining immigrant political activity in the context of the rise of the racist Northern League, the book ends with a discussion of the possibilities for a new planetary working class movement through immigrant experiences.

In his book, Colatrella counters pessimistic postmodern perspectives and gives a sweeping and visionary acccount of the opportunties for working class unity across national lines in this age of globalization.

Steven Colatrella is a former labor union organizer and Fulbright scholar. He has taught at several universities in Rome, Italy, and at Bard College. He also lectured at the University of Padua. He holds a doctorate in Sociology from SUNY-Binghamton and works with the international journals Midnight Notes and Altreragioni.