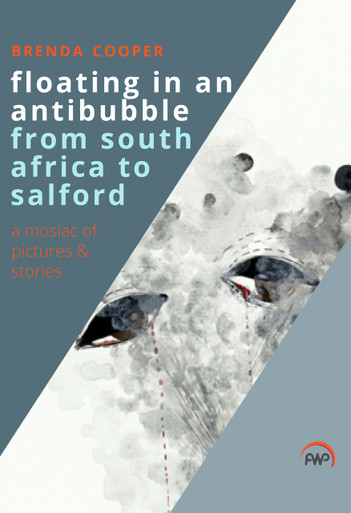 Floating in an Antibubble is a mosaic of literature, art, fiction and memoir. Brenda Cooper draws on her experience of growing up in Apartheid South Africa, on her family and on her decades of research on African and postcolonial writing.

The fragmented focus of the book is on African migration and Diaspora, coinciding with her own recent migration from Cape Town to Salford in Greater Manchester, with echoes of the migrations of her forebears from Eastern Europe and Russia to South Africa. It is situated in the cross current of the space between our shared personhood and our differences, differences of race, of gender, of history and of generation. This space is unstable and shape shifting. It is the space of the antibubble of the title, which is taken from a poem by Jo Shapcott—‘It’s as easy to make an antibubble in your own kitchen/as it is to open up a crease in language.’

The compass throughout the book is writers and artists, some white like Shapcott, most diasporic women, who are living in London, Antwerp or New York, but whose parents— one or both—were born in Africa. Brenda’s stories are catalysed by their provocations and provocative performances of colour, paint, poetry, drama, novels in verse and poetic fictions.

The book bulges with foxes, wolves, Riding Hoods, Apartheid and ancestors having a mid-life crisis. Its stories are European, African and mixed, mangled and manoeuvred by Brenda and by the artists and writers, who are also depicting their complicated lives and inheritances and who are all performing their humanity.

What it means to be human turns out to be the question behind all these fragments. Not a small question. It is a bedevilled question in the colonial context where humanity was benchmarked against a white and male normativity. The question is too big, too hot, too blinding to be looked at full frontal. Brenda, therefore, begins her book small, by peeling carrots in the opening vignette. It turns out that small becomes bigger and the carrots metamorphose into other objects through the succeeding mosaics - a pink hat, a scruffy duffle bag, ‘Ghana must go’ bags, plastic gloves, a plate fit for Jewish chopped herring, bran muffins and her Bobba’s boot. These objects were light as air in their capacity to shape shift. They were dense and weighty in their ability to be portals into history, politics, families, Yiddish humour, happenstance and a lot of song and dance.

These mundane things are not metaphors. Just say the word ‘AFRICA’ and it is a trope, already polished and executed with malice. Instead, the author holds onto magical, material, stuff to steady her passage in the fleeting antibubble. A bucket, a pair of Yiddish underpants, a shoe, a plate, a dog.

Ultimately the vast span that separates our own tiny, gargantuan lives from the flow of the world may be breached with the help of a boot or a bag. This book works on the assumption that it is only by way of the endeavour to get close to individual lives and their miriad stories that we can approach the vastness of the planet. Only with the mechanics of a weird flying antibubble has Brenda been able to confront some of her own worst fears, which, in truth, is what drove this book.

BRENDA COOPER was for many years the Director of the Centre for African Studies and a Professor in the English department at the University of Cape Town, where she is an Emeritus Professor. In 2009 she moved to Salford, where she was  an Honorary Research Associate at the University of Manchester and runs Burnish, which organises workshops on academic writing. She has published widely on African fiction in English, postcolonial literary theory and African Studies. Most recently Brenda has co-edited a book with Rob Morrell entitled Africa-Centred Knowledges: Crossing Fields and Worlds. She has recently returned to live in Cape Town and is currently researching a book But Is It Academic? Playing with Strategies of Scholarly Writing.