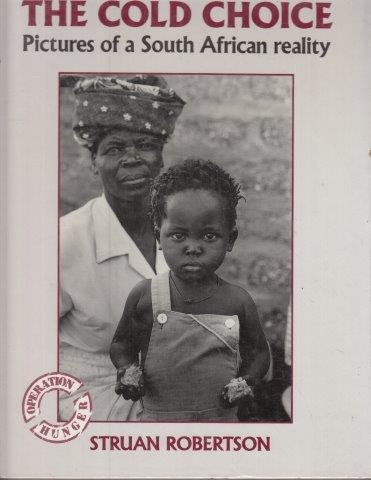 The Cold Choice is the record of four years' travelling with Operation Hunger teams around South Africa. The flip side of the glossy tourist-view of the country, this book shows South Africa as it is experienced by the majority of its people: a succession of tumbledown relocation camps and overcrowded townships with bad road, no sewerage, minimal water reticulation and no street lighting.

Yet, in this depressing squalor, Struan Robertson found something more rewarding than breathtaking tourist views. 'When I began this project I expected to record suffering and injustice. There was, indeed, plenty of both but what struck me most was the resilience of the human spirit. Even in the worst relocation camps such as Tentergate or Padstowe I found people who not only managed to survive by to find hope and meaning in their lives. I was humbled by them. They shamed my trivial discontents by their stoicism and humanity.'

Struan Robertson has worked in Africa since 1954 as a professional photographer and writer. He has held many exhibitions of his work including two for the Black Sash, 'Who Cares?' (1974) and 'Death of Sophiatown' (1984), as well as several at the Market Photo-Gallery. Robertson was a contributor to the West German exhibition of South African photography and poetry 'Nichts Wird Uns Trennen' (1983) and to Bill Brand's 'The Land' exhibition in London in 1972. A print from this exhibition is in the permanent collection of the Victoria and Albert Museum. He was one of six photographers chosen to participate in the first exhibition of photography every held at the National Gallery in Cape Town in 1977. He is an Associate of the British Institute of Professional Photography and a Fellow of the South African Institute of Photographers.