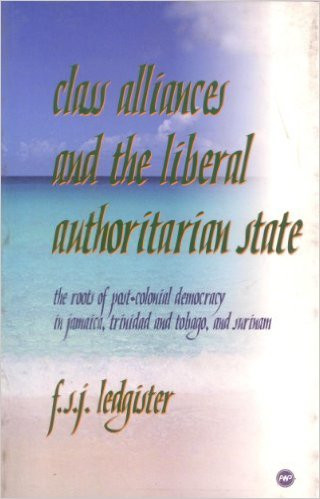 Conventional wisdom in the study of recently decolonizes states holds that the British must have created the conditions for democracy in their former colonies, as these colonies are the only ones that have continuously exhibited democratic tendencies after independence.

The political evolution of three former colonies into independence and beyond is studies via an examination of the existing literature and through interviews with journalists, scholars and politicians. These countries appear to uphold the conventional wisdom, since Jamaica and Trinidad and Tobago have been continuously democratic since independence, while Surinam has not.

It is clear from the author's research that the similarities in the political evolution of the countries far outweigh the differences. In particular, the British in Jamaica and Trinidad and Tobago, and the Dutch in Surinam, developed similar state structures—simultaneously liberal and authoritarian.

However, in two countries, Jamaica and Trinidad and Tobago, the emergence of political parties was linked to labor protests, while the linkage, though not the protest, was absent in Surinam. Democratic politics in the former two countries turns out to rest on a two way alliance between the middle and lower classes, embedded in a paternalistic state structure inherited from the colonial period. in Suriname, the absence of this alliance rendered democracy more vulnerable.

The author concludes that while the peoples of the Caribbean did not fight long struggles for independence, they have been able to preserve the least poisoned gift of the colonizer—democracy.