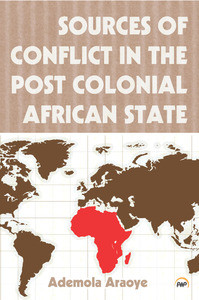 Conflicts, internal and transnational, express behavioral transformations in the way African states relate between themselves in the post-cold war era. These developments have forced the reopening of a discourse around the concept of the state, particularly its expression in multinational societies. The serial implosion of states in the Great Lakes region has been accompanied by significant difficulties in reconstructing or negotiating them back into statehood. In West Africa, the collapse of Sierra Leone, Liberia, Guinea Bissau, Cote d’Ivoire, Mali, the Central African Republic and grave instability in Nigeria force on us certain reflections.

These developments raise serious queries on the very conceptualization and theorization of conflict in Africa, including the unit and level of analysis. The Sources of Conflict in the Post-colonial African State identifies another zone of interaction; intermestic. This analytic layer is advanced as crucial for in depth appreciation of the dynamic of conflict and understanding of the process of state implosion in the post-colonial African states system. Intense interaction between domestic and transnational actors in this intermediate zone straddling the domestic and sub-regional has important consequences. These engagements highlight complexities inherent in the structural layout of the post-colonial African state system. Entrenched proto states unhinged by the end of the cold war theoretically imply that forces at play in the post-colonial states system are unlike units.

The character of the environment at once accommodating the post-colonial and proto states constrains the state’s capacity to pursue single-minded rational security policy. In this situation the monistic conception of power is an aberration. The policies of the state, often fuelled by partisan interests of the domestic hegemon and its transnational affiliates, diverge from the interests of competing domestic and transnational centers of power. Conflicts implicate all domestic groups, including trans-national affiliates, on different sides in a chaotic space where trans-national affinities drive the destabilization of  whole sub-regions. Intermesticity is a crucial deviation of the Post-Colonial African state from the Classic Modern Westphalian and the Post Modern states; two variants of the evolution of the heuristic Westphalian concept. The retrograde pre-Westphalian state is a throwback to pre-1648.

The interventions of all forces in the post-colonial state environment is to appropriate the totality of the socio-economic political space. Entangled in the zero-sum game of the weakest states in the global system are powerful elite global interests to consolidate hegemonic control over that space. The domestic, intermestic and sub-regional forces are mere proxies prosecuting a double instrumental conflict to project local partisan interests that converge with the interests of the metropoles. The framework is applied to illuminate the challenges of prolonged political instability in Guinea Bissau and the conflicts for state appropriation in Liberia.

Dr. Ademola Araoye deserves congratulations for writing this path-breaking book, based on observations of the many of the events he has admirably analyzed, as well as critical engagement with an extensive literature. The book stands out, and it should intrigue political scientists, historians, and activist politicians.

ADEMOLA ARAOYE, author of Cote d’Ivoire: The Conundrum of a Still Wretched of the Earth, is a conflict analyst with significant lived experience in post conflict settings. He is a former Nigerian Foreign Service Officer.