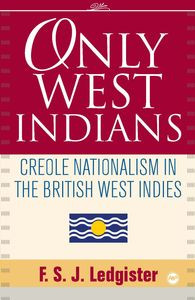 Contrary to popular belief, the ideology of empire in the nineteenth-century British resulted in a number of West Indian Creoles who took the language and values of Britain’s supposedly liberal empire and turned them upside down. Where nineteenth-century British men of letters, Thomas Carlyle, Anthony Trollope, Charles Kingsley and James Anthony Froude, defined the West Indies in terms of British imperial destiny coupled with a sometimes open, sometimes cloaked negrophobia, J.J. Thomas of Trinidad asserted that West Indians, black, white, and biracial were equal members of Victorian civilization and entitled to share in their government.

This definition was taken up in the twentieth century, first by the Trinidadian C.L.R. James who argued in terms similar to Thomas’s for an expanded role for West Indians in their own governance, and against the racist presumption of British imperialism. Shortly thereafter, Norman Manley of Jamaica, and James’s student Eric Williams of Trinidad not only argued for political and cultural autonomy but led their nations to independence, and in Williams’s case through the struggles of the post-independence period. The first objective of these men, a West Indian nation, failed to materialize, and the form of liberal-democratic nationalism they espoused has been criticized, and even rejected in the years since independence was achieved in the separate nation-states that came into existence starting in the 1960s. Nonetheless, their political vision retains creative possibilities including that of a more humane world.

Inverting the racist hierarchy of nineteenth-century British imperial thought, twentieth-century political activists in the British West Indies used the concepts of liberal ideology to claim that the subject people of the West Indies constituted a Creole nation that deserved the right to govern itself. This study of the origins and major figures of Creole nationalism considers both its limitations and its possibilities.

F.S.J. Ledgister teaches political science at Clark Atlanta University. He received his Ph.D. from the University of California, San Diego, and was also educated at New York University, and the University of the West Indies, Mona. He is the author of Class Alliances and the Liberal-Authoritarian State (Africa World Press, 1998).