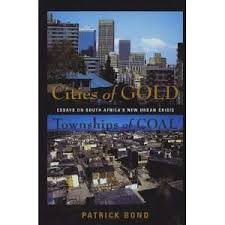 After apartheid was dismantled, South Africa's  townships residents anticipated  peace and development dividend. but as the African National Congress prepared for its second term in office (1999-2004), the cities had degenerated further into impoverished, polluted, under-serviced, zones of blight and despair.

Indeed, in many respects—unemployment, municipal cut-offs of water and electricity, substandard housing, transport violence, and crime—the townships and inner-cities were worse off than when the ANC took power. Redistribution of urban resources was not seriously on the agenda, as wealthy white suburbanites successfully defended their privileges.

Overall, Patrick Bond argues, the ANC's adoption of neo-liberal (free-market) economic and social policies—at the urging of the World Bank, US AID and local financial institutions and business consultants—during a period of volatile global capital flows through financial and real estate markets, can be blamed for the current worsening of South African uneven urban development.

PATRICK BOND is associate Professor at the University of the Witwatersrand Graduate School of Public and Development Management in Johannesburg and an associate of the Alternative Information and Development Centre (http://www.aidc.org.za) During the 1990's, he played a central role in development debates within the ANC, township civic movement and trade unions. Born in Belfast, northern Ireland, Patrick studied at Johns Hopkins University with David Harvey, and moved permanently to Southern Africa in 1989. He is the author of several books, including Uneven Zimbabwe: A Study of Finance, Development and Underdevelopment (AWP 1998)