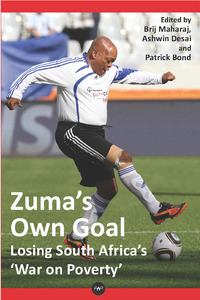 This collection of original essays provides an in-depth look at how South Africa’s government is tackling profound challenges - including economic policy, AIDS, social security, housing, basic services and education - and how society reacts.

Leading analysts show how missed opportunities during Thabo Mbeki’s 1999?2008 administration can be addressed by Jacob Zuma’s. But so far, the transition has witnessed continuity not change.

The book provides not only trenchant critiques of inherited poverty-fighting strategies imposed through neoliberal orthodoxy, including the ‘two economies’ narrative and claims of a ‘developmental state’ in the making. It also suggests new approaches that make more sense.

In the wake of a political leadership substitution – albeit a ‘feint left, pass right’ (as did Zuma, the great midfield general, during Robben Island soccer games) – there is once again a vibrant debate regarding alternatives.

One reason is the intense community and labour protest that arose over the past decade. Social mobilisation is not likely to fade in the immediate future, whether via unprecedented numbers of municipal uprisings, labour strikes or social movement activism.

However, there are distinct problems with each type of bottom?up challenge. Sober reflection about the limits of social agency is required for the period ahead, given the experiences since civil society opposition emerged ten years ago.

ABOUT THE EDITORS
Based in Durban, BRIJ MAHARAJ and PATRICK BOND are senior professors at the University of KwaZulu?Natal, in Geography and Development Studies, respectively, and ASHWIN DESAI was formerly senior researcher at the University of Johannesburg Centre for Sociological Research. The chapters in this volume were sponsored by the South Africa Netherlands Research Programme on Alternatives in Development.