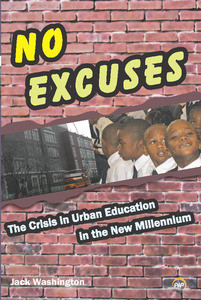 No Excuses examines the economic and political structures of global market forces in the new millennium. It challenges urban America to become proficient in those skills necessary to survive in an ever changing and challenging market economy. Such skills will require academic proficiency over verbal rhetoric. The new market forces care little for social arguments that are grounded in historical transgressions of a past era.  The shifting economic design of the new market forces engages a fresh and challenging dialog to achieve the desired results. Such challenges are grounded in competence, skill and vision. The shifting design of market interest retains one major goal: expanding the base of the market venues. Within the last thirty years, the venues have shifted from Western Europe to venues in the Middle and Far East.  This shift is not by design, but necessity and thus it comports with the same values as those set forth by European interests.  In short, “produce those services that expand the base of interest or perish for a lack thereof.” The challenges are intense and the market venues are diverse. In this new global economy, directorsof the market forces will accept NO EXCUSES for failure to produce the desired results.

“For those of us who enjoyed the phenomenal historical and cultural analysis of White Collar Factory, Dr. Jack Washington provides yet another excellent and scholarly in-depth analysis that calls all of us as intellectuals, scholars, educators, social change agents, policy makers, parents, and advocates of children, to awaken to the possibilities of true reform in the new millennium. This work is by far his best and serves as a blueprint for much needed change.”

“Jack Washington is the definitive historian of Black Trenton. His earlier volumes are superb. This book is vintage Jack Washington. Don’t miss it!”

“Jack Washington has emerged as an impassioned chronicler of the many worlds around him, as historian, critic, and, above all, as teacher. In his new book, No Excuses, he offers a candid and sometimes unsettling assessment of the situation confronting urban black Americans today. And agree or disagree, he's worth a listen, as ever.”

“Jack Washington's unique intellectual voice emerges with power and grace in this insightful new book. His talent is on full display. A wonderful read!”

JACK WASHINGTON has been an urban educator and a historian for more than thirty years. He is the author of several books. His most recent work prior to this current book, White Collar Factory has been applauded as a groundbreaking study in urban education.