BLACK WORKERS WHITE SUPERVISORS: The Emergence of the Labor Structure in South Africa, by Morley Nkosi 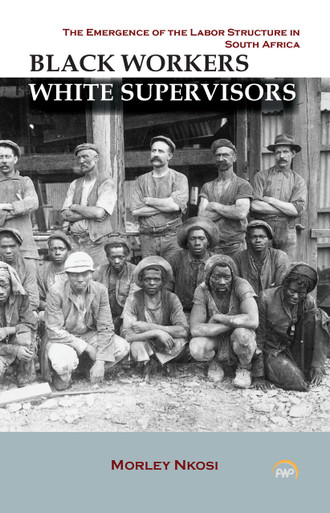 BLACK WORKERS WHITE SUPERVISORS: The Emergence of the Labor Structure in South Africa, by Morley Nkosi

This book argues that the contours of the labor structure in South Africa first emerged in the agricultural and pastoral economy of the Cape colony under the Dutch East India Company (DEIC) from the mid seventeenth century onwards. This period set the division of labor along crude racial lines. The bifurcated structure of labor was later refined, institutionalized and rigidified during the development of the mining industry: first in copper, then diamond and especially gold mining in the country during the nineteenth and twentieth centuries. This structure has come to permeate all workplaces in the country up to and including the current period whether in the mining, manufacturing and service industries. Where there has been significant transformation since 1994 has only been in the public sector.

The story the book presents explains how this dual and racially divided labor structure developed. In the pastoral and agricultural economy black slaves performed all the hard and menial work under the supervision of white colonists. This model was adopted by the British who took over the Cape Colony and began their penetration and conquest into the hinterland now called South Africa.

The pastoral and agricultural industry of the Cape was followed by the development of mining. First there was the copper mining industry of Namaqualand, then came the diamond mining industry of Griqualand West which was followed by the gold mining industry of the Witwatersrand. Each industry’s labor structure was carried into the next but with modifications and ‘improvements’ dictated by the nature of the succeeding industry.  A constant and visible manifestation of this labor structure has been, and still is, black workers on any site being supervised by whites.
Powerful international forces that influenced the circumstances in which these four industries developed their respective labor structures were mercantilism, the industrial revolution, the free-trade regimen, British imperialism and colonialism as well as the use of gold to buttress and support the international financial system. Capital, skilled labor, technology and methods of organizing workplaces and processes were imported into these industries primarily from the Netherlands, Britain, Australia and the United States. These factors of production were used in the context of conditions and structures created by colonialism which provided two indispensable factors of production; land and labor.

From around the 1880s up to 1914, American consulting engineers, hired and based in London by British capital, were instrumental in influencing the deployment of vast sums of European capital into mining ventures throughout the world and recruited American mining engineers to manage these ventures.  During this period, European capital, particularly British capital, controlled many mines in North and South America, Asia, Australia and Africa. The largest and most significant portion of European mining capital in Africa was invested in South Africa and even there the skills of American mining engineers were respected and sought after.

"The book is a political economy, historical and technical masterpiece. It demonstrates how African agriculture was destroyed by selfish mining ventures driven by European conquest of South Africa. The result of these developments is the long-term effects of the racially based job reservation system that haunts South Africa today as well as the institutionalization of the migrant labor system that has not been destroyed by the post-apartheid democratic government. Thus, economic reconciliation is a must for South Africa. Scholars and students that are pursuing inquiry into decolonizing higher education and studying South Africa as an emerging market economy must read this seminal book."

"Black Workers White Supervisors’ presents an empirically rich, accessible and sufficiently detailed seminal contribution to the growing literature on the economic history of South Africa. This is a uniquely fresh empirical gaze into the history of labour, race and class in South Africa’s mining industry. It is also a very timely contribution, particularly when new radical debates and imaginaries on labour and wealth distribution are being tabled by many scholars and in the Global North and South. Like its title – this book doesn’t disappoint!"

ABOUT THE AUTHOR
MORLEY NKOSI left South Africa in 1960 for political reasons and spent the better part of the next three decades as a political exile and activist in Africa, the United Kingdom, and the United States.  During his exile years he studied at New York University, Rutgers University, and the New School for Social Research where he obtained his Ph.D. He taught and served as chair of various departments at Upsala College, Hofstra University and at the Graduate Business School of Rutgers University. Since his return to the African continent he has worked as a consultant to regional economic integration organizations and served on numerous boards of South African research and business organizations. He also served as acting vice chancellor at the University of the Transkei.