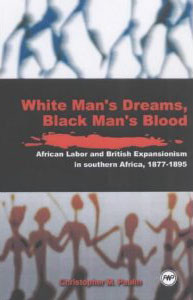 This book focuses on British expansionism in southern Africa during the last three decades of the nineteenth century.  In particular, it studies the connection between the birth of the mineral industries in southern Africa and the conquest of virtually every independent polity in Africa. It argues that British expansionism throughout southern Africa focused on creating a cheap and readily available supply of African labor through conquest, dispossession, taxation, and the creation of the so-called “native reserves” or “locations.”

Traditionally, historians have focused on one of three points when searching for the key explanatory factor to the motivation behind British expansionism in southern Africa.  These three points are the strategic imperative of controlling southern Africa, the forward momentum of capitalist exploitation, and the initiative of local politicians in provoking expansion and conquest. Although a combination of all these factors were essential in motivating British expansionism in Southern Africa, scholars have largely neglected the demand for African labor as one of the economic factors in the late nineteenth century.  The building of the mineral industry in an area that lacked an essential industrial infrastructure required a huge work force. This work force was to be found among the African population.  However, when these potential wage laborers proved reluctant to abandon traditional means of subsistence, coercive measures were employed.  One by one, independent African polities throughout southern Africa were conquered, dispossessed, restricted to “native reserves,” and taxed into becoming a cheap and readily available supply of labor for European enterprises.

The fundamental argument in this book is that the metropole and the periphery were equally cognizant of the labor crisis that faced the mineral industry in southern Africa during its nascent stages in the late nineteenth century. London directed or allowed the defeat and dispossession of Africans as a means to obtain labor. Working hand in hand, British officialdom in London and Cape Town did everything in its power to reduce southern Africa’s indigenous population to wage earners dependent on Europeans for their survival.  In so doing, Paulin argues, they laid the foundation for apartheid in the twentieth century.

Christopher M. Paulin is Assistant Professor of History at Manchester Community College in Manchester, Connecticut.  He received his doctorate in history from the University of Connecticut in Modern European and African History with a specialty in imperialism.  He has contributed entries to the Encyclopedia of U.S. Foreign Policy on Lesotho, Rwanda, Harold Macmillan, and Margaret Thatcher. His research area primarily focuses on Great Britain’s motivation for imperialism in sub-Saharan Africa.