WHISPERING OUT LOUD:Voices of Africana Edited by Michael T. Tillotson 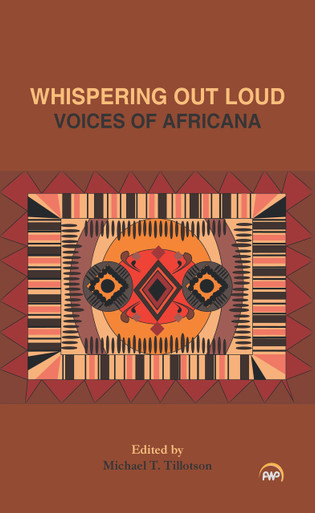 WHISPERING OUT LOUD:Voices of Africana Edited by Michael T. Tillotson

This book contains a collection of articles written by Africana Studies scholars: Kaila Story, De Reef Jamison, Karanja Carrol, Dawn Elissa Fischer, Serie Mc Dougal, Justin Gammage, Marquita Gammage, and Michael Tillotson. Kaila Story examines the dire consequences of young Feminists of color engaging with and adopting a framework that has been repackaged for their racial and class complacency. De Reef Jamison looks at the contributions of African-centered psychologist Bobby Wright through the lens of critical race consciousness, mainstream psychological theory and mentacide. Karanja Carrol examines the work of Cheikh Anta Diops “Two Cradle Theory” as an explanatory basis for the differences in worldview between African and European peoples. Dawn Elissa Fischer explores the wide vistas of the pioneering work of Black and/or Africana-identified anthropologists and how their work relates to the founding philosophies of Black/Africana Studies. Serie Mc Dougal investigates the enduring role and function of theories and paradigms in human inquiry and their specific functions in the discipline of Africana Studies. Justin Gammage interrogates and assesses the economic state of the African American community in Philadelphia and brings forth a solution set for practical application. Marquita Gammage addresses the criticality of illuminating how women of African descent perceive the images of themselves in popular rap music. Michael Tillotson explores the critical necessity of an egalitarian hermeneutic to investigate the lived realities of people of African descent.

MICHAEL TILLOTSON teaches in the Department of Africana Studies, at the University of Pittsburgh. His peer reviewed articles are housed in the leading scholarly journals in Africana Studies. His latest book: Invisible Jim Crow: Contemporary Ideological Threats to the Internal Security of African Americans (Africa World Press) was awarded the “Best Scholarly Book Award” by the Diopian Institute for Scholarly Advancement. His current research agenda centers on the intersection of anti-egalitarian ideologies and their influence on the contemporary intra-racial social landscape of African Americans.