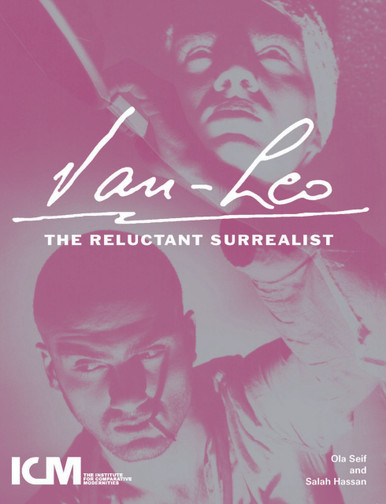 Van-Leo (1920-2002) was a portraitist photographer who ran a successful studio in Cairo during the second half of the twentieth century. An artistic highlight of his career was his self-portraits, particularly those produced in the 1940s. Born Levon Boyadjian, the artist’s admiration for Van Gogh led him to change his name to Van-Leo, a visible affinity in the photographer’s work. Constantly experimenting, Van-Leo treated his self-portraits as testing grounds for new set-ups and photographic techniques including solarization, use of glass shields and filters, sandwiched negatives, multiple exposures, and creative lighting effects.

The essays and images featured in this catalogue focus on two themes: moments that capture important events and metamorphoses in the artist’s life, and Van-Leo’s obscure connection to the Egyptian Surrealist movement simultaneously flourishing at the other end of the city.

Van-Leo’s connection with the Egyptian Surrealist movement, and particularly, the Art and Liberty Group seems slight. Van-Leo’s involvement in the intellectual discourse of the group is questionable, even doubtful. Nevertheless, Van-Leo produced a portrait of Angelo de Riz taken at the Maison des Artistes where the group was active. Van-Leo also befriended Jacques Ovadia, an involved member in the Art and Liberty circle. Ovadia, a journalist by trade, wrote several articles about Van-Leo’s photography, claiming that despite his works’ surrealist leanings, Van-Leo never believed in Surrealism as either a guiding philosophy or mode of production. Could Van-Leo have been a surrealist by accident, or even a reluctant one?