WINDOW OF OPPORTUNITY: EU Development Cooperation after the End of the Cold War, by Mirjam van Reisen 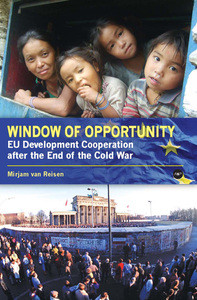 WINDOW OF OPPORTUNITY: EU Development Cooperation after the End of the Cold War, by Mirjam van Reisen

On 9 November 1989 the Berlin Wall fell, taking world leaders by surprise and bringing an end to the Cold War. A ‘policy window’ was opened leading to the redefinition of development co-operation in Europe and internationally. A self-confident and assertive European Union, searching for its ambition, seized the opportunity to emerge from these events as a global player.

This study looks at the history and evolution of EU development co-operation policy, the factors that triggered the change and the forces that influenced the direction of that change. It examines current issues in EU development co-operation policy to answer the important question of where the EU is headed in the future, and when this policy window will close for a new chapter in EU external relations history to open.

ABOUT THE AUTHOR
Mirjam van Reisen is the founder and Director of European External Policy Advisors (EEPA) based in Brussels. EEPA is a centre of expertise on the European Union and its international policies, especially in relation to developing countries. She is the author of numerous publications and commentaries on the EU’s policies and their impact on poverty eradication, including EU ‘Global Player’. The North – South policy of the European Union, and contributed to publications such as Reality of Aid, Social Watch (subsequent editions) and Development Policy in a Changing World: Challenges for the 21st Century.