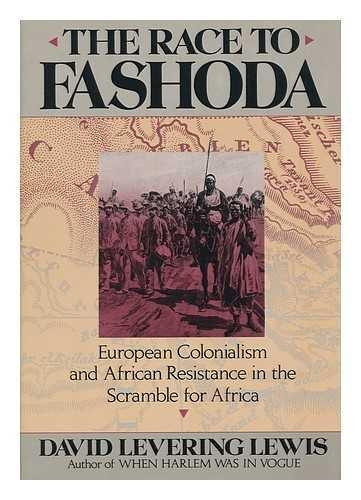 Before 1870, the abandoned Egyptian fortress at Fashoda, on an obscure juncture of the White Nile, meant little to the outside world or, indeed. to most Africans. But suddenly, because of emerging rivalries between the Western powers, the rise of European colonialism, and its own strategic location, Fashoda became the focal point of an intense and bloody campaign involving England, France, Belgium, Germany, and Italy. This struggle also, unwittingly gave rise to a burgeoning resistance movement on the part of Black Africa—a movement that would culminate in the independence rebellions of the twentieth century.

Based on a wealth of previously unpublished documents, The Race to Fashoda tells intense, fascinating detail the story of Europe's incursions into Africa in the nineteenth century—and, for the first time, tells it from the perspective of the Africans themselves, many of whom were waging an arduous, often successful war against encroachment. Along the way David Levering Lewis demonstrates how the race to Fashoda, one of the most grueling episodes in the "Scramble for Africa," fostered the European political tensions that would lead inexorably to World War I and forever change the face of the Western world.

Here is a story as complex and stirring as any adventure tale, with a cast of characters to match: the driven, manipulative explorer Henry Mort on Stanley, who slaughtered thousands for the benefit of the front pages back home; African resistance fighters Tippu Tip and Samori Ture among the first to organize their compatriots against the European onslaught; Captain Jean-Baptiste Marchand, the consummate career officer, who fought the Africans, the British, and his country's unstable political climate to be the first to reach Fashoda—only to be ordered, once there, to hand it over to the British; Herbert Kitchener, Marchand's great rival, whose ingenious railroad brought him closer and closer to victory as the race drew to its climax; Abdullahi, the Sudan's xenophobic khalifa, who paradoxically found himself ruler of the continent's most contested piece of real estate; King Leopold II of Belgium, who pursued his share of the Congo with the sly acquisitiveness of a spoilt child; the shrewd Ethiopian monarch Menilek II, who swiftly learned how to use European vanity and conflicting interests to his own advantage; and the enigmatic Austrian Jew Eduard Schnitzer, who, as "Emin Pasha;" retreated into the jungle and commanded a private native army with all the resourcefulness of Conrad's Mr. Kurtz.

With its dramatic reconstructions and provocative viewpoint, The Race to Fashoda will stand as an insightful, compelling addition to our understanding of this key moment in modern history.

"In his The Race to Fashoda, the truly gifted historian David Levering Lewis, fueled with his trademark awesome research, has written a masterwork about the European ravening of Africa of a scale and intensity previously unknown to most of us.''
—Alex Haley

"This is history—telling at its best—an adventure about the Scramble for Africa that David Lewis brings to life with original research and a flair for narration."
—David Lamb, author of The Africans

"A fascinating account of a small but important episode in the history of Africa. In the future, no scholar writing on Central Africa will neglect to study closely this seminal work."
—Byron Farwell

"David Lewis, a consummate writer and historian, has produced a book about Europeans and Africans that is fair, honest, and always revealing. His African perspective corrects a Eurocentric view of the Fashoda crisis, while his characterizations of both Africans and Europeans present universally fascinating protagonists and situations."
— Harold Marcus, African Studies Center, Michigan State University

"It is superb, and should be required reading in all Afro-Atlantic history courses."
—Robert Farris Thompson, author of Flash of the Spirit

"I am full of admiration for the way in which this book puts the Fashoda incident into perspective, giving us an African background hitherto unexplored. The Race to Fashoda is a remarkable piece of work, a model for how to write colonial, imperial history. It is a landmark accomplishment."
—William H. McNeill, Past President, American Historical Association

ABOUT THE AUTHOR
DAVID LEVERING LEWIS  is Martin Luther King, Jr., Professor of History at Rutgers University. He has been awarded fellowships by the Woodrow Wilson International Center, the Center for Advanced Study in the Behavioral Sciences, the National Humanities Center, and the John Simon Guggenheim Memorial Foundation. His previous books include King: A Biography; Prisoners of Honor, a study of the Dreyfus Affair; District of Columbia: A Bicentennial History; and When Harlem was in Vogue, a social history of the Harlem Renaissance.