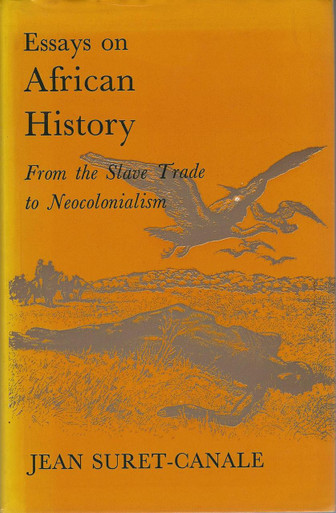 These essays are the work of one of France's most distinguished living students of Africa, at once a pioneer in the modern achievement of a scientific understanding of the continent and a fearless critic of all easy orthodoxies and accepted attitudes. The English edition of one of Suret-Canale's principal works, French Colonialism in Tropical Africa, 1900-45 (C. Hurst, 1971), was received as an important contribution to studies of the colonial system in the vast territories of French West and Equatorial Africa.

Written at various times, some of these essays have responded to particular debates or the challenges of particular discussions, which have in no way lost their relevance to the 1980's and 1990's. Such is the case with the first essay, where the author considers the application of a marxist analysis to the elucidation of Africa's pre-colonial societies, a subject  on which the last word is far from said; and with the second essay in which Suret looks at the historical and social significance of the Fula (Peul) hegemonies of the seventeenth to nineteenth centuries, another subject of crucial importance, then and now, for an understanding of the growth and variety of West African state structures.

Other among these essays have marked steps in the evolution of a coherent understanding of the processes of 'decolonisation'. In this context the most influential, perhaps, has been the eight essay here, treating of the nature of 'chieftainship' within the French colonial system, and the ways in which the chiefs of the Futa Jalon, in (then French) Guinea, were dislodged by the pressures of an anti-colonial nationalism. The tenth essay belongs to the same category, and offers Suret's thoughts on 'development theory." And then two quite different essays, those on Vigné d'Octon and Louis Hunkanrin, reveal other aspects of this writer's wide concerns. Here he recovers from oblivion an early critic of French colonialism, a polemicist and publicist who was seen in those days of high imperialism as an eccentric and extremist but whose voice, today, comes down the wind of time with a bracing gravity and good sense. In comparison with Vigné Dahomey (now the Republic of Benin), Louis Hunkanrin, whose stubborn intelligence has likewise won Suret's sympathy.

These essays are written to be enjoyed as well as to instruct. Aside from their inherent interest their vale will be found, I think, to lie in their qualities of erudition, lucidity and independence of judgement.