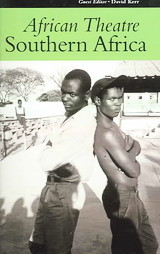 Articles and interviews on theatre in Southern Africa include the familiar territory of South Africa and Zimbabwe but also countries which have received little previous attention, such as Angola and Namibia. The articles range from evaluations of single plays to accounts of play-making processes, theatre for development and the relationship between modern drama and indigenous performance.

ABOUT THE EDITOR
DAVID KERR is professor of theater in the Fine & performing Arts Department at University of Malawi. He has worked in universities in Malawi, Zambia, and Botswana for over 30 years, where his main field, both as theorist and practitioner,has been popular theatre and entertainment media, particularly in thecontext of social transformation. His publications include African Popular Theatre in Sub-Saharan Africa and Dance, Media Entertainment & Popular Theatre in South East Africa.