THE PARADOX OF TWO SUDANS: The CPA and the Road to Partition, by Mansour Khalid 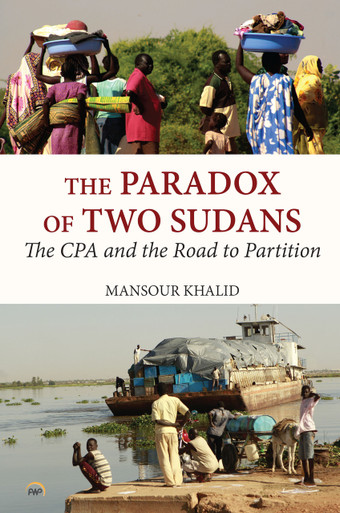 THE PARADOX OF TWO SUDANS: The CPA and the Road to Partition, by Mansour Khalid

This book offers thoughtful insights into the protracted peace process that led to the Comprehensive Peace Agreement of 2005 (CPA): its arbiters, its major players, and its ultimate failure to produce a united Sudan. It is a rare glimpse into the road to the partition of Sudan by one of the most formidable Sudanese scholars and a seasoned diplomat, who above all happened to be an insider to the same peace process.

“There is perhaps no better Sudanese than Mansour Khalid to present an objective assessment relating to the negotiating and implementation of the Sudan Comprehensive Peace Agreement (CPA) signed in January 2005. The rigorous, passionate but objective analysis by Mansour Khalid contained in this book tells a story which, in a real sense, can and should serve as an important manual to help guide all of us as we continue to engage the struggle for the renewal of our dear Continent. This is a book that we must not only read, but which we must study.
-Thabo Mbeki, Former President, Republic of South Africa

Mansour Khalid grounds intellectual production and practical experience in the complicated Sudanese historical context, producing a text that attains the status of an archive by itself. The detailed narration of peace and conflict reveals actors at work, making peace and war, and simultaneously offering promises and anguish. The book brilliantly nestles concrete historical narratives within an engaging ethnography, providing innovative approaches to understand the complexity of peace making, the frailties of institutions, the passion of committed peace activists, and the devastations that a conflicted elite can manufacture and sustain. A formidable achievement, it will forever remain a landmark book in the understanding of modern Africa, a reading experience that can never be acquired within the four walls of any college classroom.

-Toyin Falola, The Jacob and Frances Sanger Mossiker Chair Professor in the Humanities, University of Texas at Austin, and President, African Studies Association.

MANSOUR KHALID is former Sudan Minister of Foreign Affairs, and councillor and advisor to the late John Garang, the founder and leader of the Sudan People’s Liberation Army/Movement (SPLA/SPLM). He has also served as Sudan’s Minister of Youth and Culture and Minister of Education. As a foreign minister during the former President Jaafar Nimeri’s regime, Khalid negotiated the first peace agreement that ended the North-South civil war in 1972. He is author of several books including: The Government They Deserve (1986), Numeiri and the Revolution of Dis-may (1984), and War and Peace in Sudan: A Tale of Two Countries (2003).