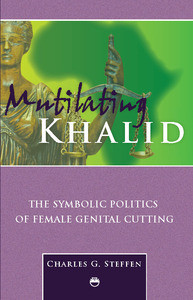 In Mutilating Khalid, historian Charles G. Steffen examines one of the most remarkable cases of “female genital mutilation” ever to be prosecuted in a United States court. In 2006 a suburban Atlanta jury convicted Khalid Misri Adem, a thirty-one-year-old Ethiopian immigrant, of two counts of aggravated assault and cruelty to children for allegedly circumcising his daughter when she was two years old. The judge in the case sentenced him to ten years in a Georgia state penitentiary. The precedent-setting Adem case received widespread coverage in the national and international media, energized women’s rights and human rights activists from Atlanta to Nairobi, and prompted the Georgia state legislature to pass a law criminalizing female genital mutilation.

Mutilating Khalid explores the symbolic politics that surrounded the Adem case, showing how prosecutors, judges, reporters, politicians, and activists set out to mold the public’s image of Khalid and to appropriate his symbolic value for their own particular purposes. As a result of their efforts, Khalid came to personify a dark and forbidding world at odds with women’s rights, family values, and enlightened modernity. East Africans watched the Adem case unfold with a growing sense that each and every one of them was on trial, for the publicity surrounding the prosecution seemed to revive stereotypes of Africa as a “Dark Continent” where superstition, savagery, and bloody rituals held sway. Protesting that Khalid was convicted not on the strength of the evidence presented against him but because of the fearful symbolism he came to embody in the public mind, East Africans from Atlanta to Addis Ababa mounted a campaign to appeal the verdict to a higher court. Mutilating Khalid should be of interest to anyone concerned about dangerous forms of symbolic politics that have arisen as transnational immigration alters the human landscape of American cities.

ABOUT THE AUTHOR
CHARLES G. STEFFEN is a professor of history at Georgia State University in Atlanta. The author of several books on American history, he is currently researching the political reconfiguration of Atlanta in response to neoliberalism and globalization.