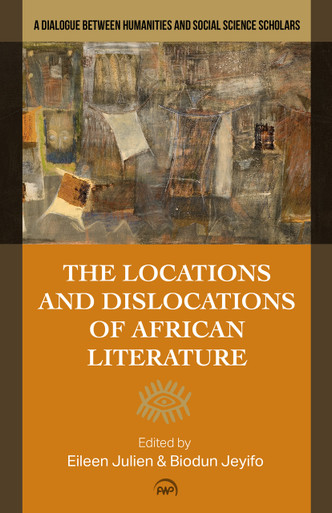 The Locations and Dislocations of African Literature: A Dialogue Between Humanities and Social Science Scholars brings together classic studies by some of the best known scholars in the field.  It places these studies for the first time in disciplinary frameworks and alongside one another, as in the several conversations that gave rise to them. In essence, the book puts Africanist humanities and social science scholars in rigorous and productive dialogue with one another. Such a project may seem to have nothing new about it:  Anthropologists and historians of Africa often flesh out theories and chronologies specific to their disciplines with African novels; and scholars of African literary texts sometimes reference ethnographies, biographies, and histories to describe communities, individual lives and social realities from which creative works draw inspiration and to which they may refer.  However, this book goes beyond such cursory and nicely complementary “interdisciplinarities.”  It looks more critically at the assumptions governing such symbiosis, its meanings and effects, especially the overvaluation of African creative texts as ethnography or history and their undervaluation as literature.  It does not argue that creative texts should be viewed as narrowly “esthetic” but demonstrates that the relationship between literature and these multiple disciplinary practices has been productive in distinct and unusual ways, both empowering and problematic.  This volume calls attention to these practices and the constitutive power of the institutions governing African literature. Thus the “locations” of the title has, at the very least, a double valence. On the one hand, it underscores disciplinary formations and fields of studies in their diversity: history; anthropology; comparative literature; “Francophone” and gender studies; African and African diaspora studies. On the other hand, it also draws attention to historically and culturally specific institutional centers such as Ibadan and Leeds, Dakar and Paris, Nairobi and Bloomington that have been pivotal in the production and study of modern African literatures.

ABOUT THE EDITORS
EILEEN JULIEN is Professor of Comparative Literature, French and Italian, and African Studies at Indiana University Bloomington.  She teaches and publishes primarily on the literature and culture of Africa, the Americas and France in their interrelationships.  She is the author most recently of Travels with Mae: Scenes from a New Orleans Girlhood (2009).  She was founding director of the West African Research Center (Dakar) and co-founder and co-president of the New Orléans Afrikan Film and Arts Festival Project.

BIODUN JEYIFO is Professor Emeritus of English, Cornell University and Professor of African and African American Studies and Professor of Comparative Literature at Harvard University. His book, Wole Soyinka: Politics, Poetics and Postcolonialism (Cambridge University Press, 2004) won one of the American Library Association’s “Outstanding Academic Texts” (OATS) awards for 2005. More recently, the two-volume Oxford Encyclopedia of African Thought (OUP) that he co-edited with Abiola Irele was published in 2010.