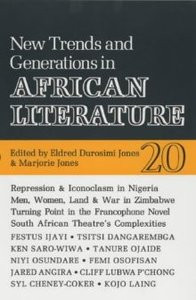 Professor Eldred Jones says 'African literature continues to be intensely political and seems destined to remain so for some time. The writers are in the thick of the fight for the true liberation of their countries, a position which is still fraught with dangers.' He believes that 'it is is possible to distinguish in the literatures of most countries pre-independence from post-independence literature but only as trends rather than as sudden dramatic breaks.'

The articles in this collection point up:

Professor Jones says 'South African writers will now have to emerge from the dominating theme of apartheid into close examination of humanity in a "free" society... The military phenomenon has provided Nigeriain writers with a succession of sub-periods int heir literary history.'