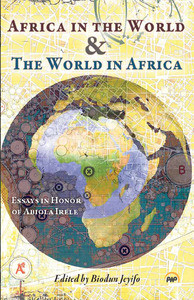 This is a collection of essays by some of the most prominent and influential writers, scholars and critics of the African arts and humanities. The initial impetus for the collection came from an international symposium held at Harvard University in September 2007 in honor of Abiola Irele.  The full complement of contributors includes Abiola Irele himself, Wole Soyinka, Tim Crib, Femi Osofisan, Biodun Jeyifo, Elaine Savory, Tejumola Olaniyan, Olakunle George, Jean-Godefroy Bidima, Mpalive-Hangson Msiska, Moradeun Adejunmobi, Akin Adesokan and the late Esiaba Irobi. The quality of the essays by these writers and scholars collected in this volume is evident in many ways: the weight of knowledge and experience that they bring to their analyses and evaluations; the radical reinterpretation of previous debates and controversies in the field that inform their essays; and the prospective anticipation of future developments that loom on the horizon of the present. It is also noteworthy that though literary critics and theorists constitute about half of the contributors to the volume, there are also philosophers, sociologists and theatre and performance studies teachers and practitioners in the list of the authors gathered in the volume. Thus, the range and diversity of interdisciplinary or cross-disciplinary perspectives and interests is very broad and capacious. This is particularly pertinent to the theme of the collection – Africa in the world and the world in Africa.

In different but complementary ways, all the essays take their point of departure from this broad topic. On balance, it could be said that the second rhetorical half of the topic – “the world in Africa” – rather predominates in most of the essays. Three factors are responsible for this. First, many of the contributors are located in academic institutions outside the African continent and are thus, as it were, “looking in” from diverse spatial and discursive locations in the world.  Secondly, “Africa in the world” has been the subject of Africanist scholarship of a Pan Africanist or “nationalist” school in the last few decades and has come under considerable critical scrutiny. Thirdly, African diasporic studies have emerged clearly in the last two decades as a compelling and increasingly influential current of African studies, especially in Europe and the Americas. But it remains true that for virtually all the contributors to this volume, there is an inextricable epistemological connection between “Africa in the world” and “the world in Africa”. This is why together, the essays in this collection take up some of the most urgent and perplexing crises and challenges confronting African nations and the Africanist humanities at the present time in open, flexible and always engaging ways.

BIODUN JEYIFO is Professor of English (Emeritus) at Cornell University and Professor of African and African American Studies and of Comparative Literature at Harvard University. Prior to Cornell and Harvard, he taught at the University of Ibadan and the University of Ife in his native Nigeria and at Oberlin College in the United States.. He has lectured widely in Africa, Europe, North America and Asia.