THE DEBT TRAP IN NIGERIA: Towards a Sustainable Debt Strategy by Ngozi Okonjo-Iweala, Charles C. Soludo and Mansur Muhtar (HARDCOVER) 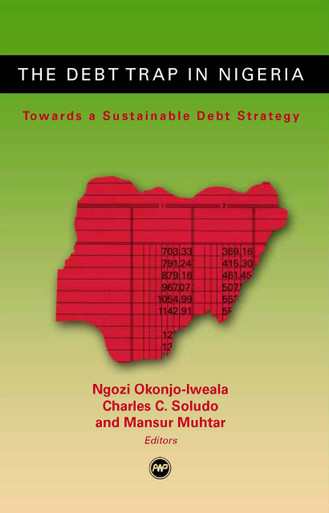 THE DEBT TRAP IN NIGERIA: Towards a Sustainable Debt Strategy by Ngozi Okonjo-Iweala, Charles C. Soludo and Mansur Muhtar (HARDCOVER)

The Debt Trap in Nigeria—Towards A Sustainable Debt Strategy is the first major study to put the debt question in Nigeria into perspective. It is the outcome of a historic conference held in May 2001, at Abuja, to debate Nigeria's future in the context of the debt overhand. Convened by the National Debt Management Office, in collaboration with the Africa institute for Applied Economics, Enugu, and the UK Department for International Development, the Conference was attended by a broad spectrum of local and international participants from the public and private sector.

This book captures the salient points of the various presentations, highlighting the consensus reached on the way forward, the recommendations proffered on reducing the debt burden, for strengthening the institutional framework for debt and resource management, and for resuming sustainable development. The call is to all involved, Nigerians in general and the international community in particular, to more proactively work to help the country exit the debt trap, and refocus its resources on fighting poverty including the achievement of the internationally agreed millennium development goals.

Ngozi Okonjo-Iweala, an Economist, is currently Vice President and Corporate Secretary of the World Bank Group. In 2000, she took a leave of absence from the Bank to serve as Economic Advisor to President Obasanjo of Nigeria, where she was where she was primarily responsible for helping to rationalize the management of Nigeria's debt, through the creation of a new National Debt Management Office. Dr. Okonjo-Iweala, a graduate of Harvard and of the Massachusetts Institute of Technology, has published several papers on development issues, particularly those confronting low income countries.

Charles C. Soludo is the Executive Director, African Institute for Applied Economics (AIAE) Enugu, Nigeria, and also, a Professor of Economics at the University of Nigeria, Nsukka. Dr. Soludo has consulted extensively for the major multilateral development organizations, including the World Bank, the International Monetary Fund, UN agencies, and USAID, and has published extensively on African economic issues.

Mansur Muhtar, a Senior Economist with the African Region of the World Banks, is currently on leave of absence with the Nigerian government as a Director in the newly established National Debt Management Office. He holds a doctorate degree in Economics from the University of Sussex.