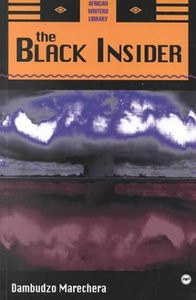 "A profound even if exaggeratedly self-aware writer, an instinctive nomad and Bohemian in temperament, Marechera was a writer in constant quest for his real self, quarrying towards a core that he once wryly expressed in the cry, 'My whole life has been an attempt to make myself a skeleton in my own cupboard.'" --Wole Soyinka

This was the first volume of Dambudzo Marechera's work to appear since his death in 1987. The title piece, the major work in this collection, was written in London in 1978. It has been edited here by Marechera's biographer, Flora Veit-Wild, together with three short stories and two poems from the same period. Veit-Wild's introduction provides a vivid picture of the young Zimbabwean's life in Britain as a student and writer. 'The Black Insider' develops the preoccupations of his award-winning 'House of Hunger' by exploring, in his devastatingly honest way, the predicaments of exile and the black identity, and examining the realities of living under the threat of the Bomb.

Above all, 'The Black Insider' gives a brilliant and profound insight into Marechera's concept of the liberating force of literature, a literature which "unhinges the world and churns up people's minds."

Dambudzo Marechera, a Zimabwean who died at the young age of 35 in 1987, is also the author of the award winning novel, House of Hunger. He left behind a large number of unpublished literary works. The Black Insider, Cemetery of Mind, and Scrapiron Blues comprise many of his poems and short stories that were published after his death.