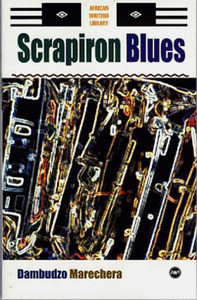 This is a stunning collection of Marechera's last writings, evoking city life with its many disparate facets - from the glittering fashion shops in First Street Mall to the tramps in the alleys, and in Marechera's only known piece in Shona, "The Servants' Ball." What at first sight seems peaceful and harmless, is suddenly disrupted by flashes of madness for, in Marechera's universe, everyday life is always haunted by the nightmares of Zimbabwe's past.

In the "Concentration Camp," Marechera gives a poetic, deeply felt voice to the dread experienced by former inhabitants of the "keeps," the restricted villages of Zimbabwe's War of Liberation. Often he takes a child's view to measure the horrors of adult society. Gentleness paired with sarcasm marks his hardly known children's stories.

"A profound even if exaggeratedly self-aware writer, an instinctive nomad and bohemian in temperament, Marechera was a writer in constant quest for his real self, quarrying towards a core that he once wryly expressed in the cry, "My whole life has been an attempt to make myself a skeleton in my own cupboard." The reward of "Scrapiron Blues" is that he has succeeded largely in laying the ghost of that skeleton, and bringing his tormented humanity to bear on the plight of others, their loves, their little tragedies, their sense of mockery and love of life."
- Wole Soyinka

"Dambudzo Marechera was and is an important voice in African literature. Although he died young and his output was regrettably small, the difference in his voice, in his concerns and in his attitude added something special and enduring to the body of African literature."
- Dennis Brutus

ABOUT THE AUTHOR
Dambudzo Marechera, a Zimbabwean who died at the young age of 35 in 1987, is also the author of the award winning novel, House of Hunger. He left behind a large number of unpublished literary works. The Black Insider, Cemetery of Mind, and Scrapiron Blues comprise many of his poems and short stories that were published after his death.