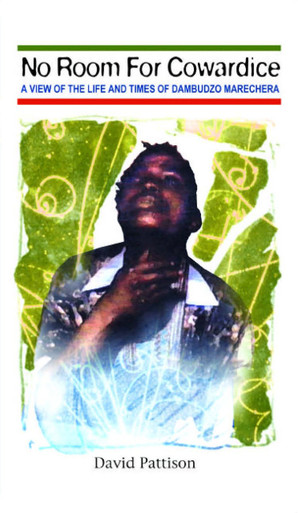 The title of this first full-length study of the work of the Zimbabwean novelist, poet, and dramatist Dambudzo Marechera (1952-1987) was taken from The Journal, in which Marechera declaims the following: A genuine writer must always be prepared to fight for his work. In fact he must expect all kinds of trouble from every quarter. There is no room for cowardice in writing (The Journal, Scrapiron Blues).As this study reveals, Dambudzo Marechera found trouble almost everywhere in his short and eventful life. It all began in the seething cesspit of his early years in Zimbabwe. In 1973, he was expelled from the University of Rhodesia for political reasons. Then, in 1976, he moved from New College, Oxford, where he was charged with alleged arson, drunkenness and aggressive behavior, into the peripatetic life of the writer tramp in London and Harare. Eventually, at the age of 35, he died a lonely and tragic death after his life had lurched from one disaster to another. In this book, Pattison engages with these major events in Marecheras life, but concentrates mainly on his writing. Earlier criticism about Marecheras writing was primarily directed at his life rather than his writingand this book aims to address this imbalance.

Although Marecheras fiction is often autobiographical, it is surprisingly accomplished in a variety of genres. A highly talented novelist, Marechera was also a fine short story writer, a very effective dramatist, and a moving lyric poet. This book promises to reveal that the quality of his writing is enough of a reason to read Marechera.

ABOUT THE AUTHOR
DAVID PATTISON is a poet and writer. He is a senior lecturer in Organizational Studies at the University of Lincolnshire and Humberside, Hull, England. He has written various articles on Dambudzo Marechera and Zimbabwean literature. He has also published two collections of poetry, Casting a Faint Shadow and The Face on the Page.