Ngugi In the American Imperium edited by Timothy J. Reiss 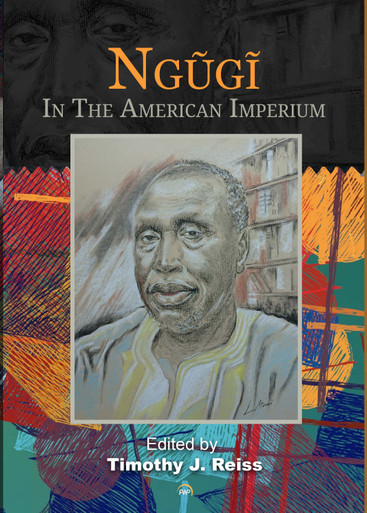 Ngugi In the American Imperium edited by Timothy J. Reiss

This collection on Ngũgĩ’s work and the reach of his thinking chiefly within the US and areas of its closest hegemony joins artists, activists, critics and scholars (often the same) from the Caribbean through North America to Hawai‘i. All have been deeply touched by Ngũgĩ’s artistic, critical and political work, and testify to his being perhaps the “symbol” of radical political and artistic exchanges between Africa and America (and the West generally) and how that readily expands to global transcultural dialogue (as his own chapter attests). The chapters, together and singularly, track his hopeful but not naïve path from decolonizing the mind (defusing the “cultural bomb” that is colonizing’s obliteration of names, languages, cultures and homeland bonds) to balancing cultures as equal knots in the mesh of an evenly-woven global net, then to finding and making ties and exchanges in a global dialogue. For some this means seeing how Ngũgĩ’s novels sap and alter “traditional” (Western) ideas and aims of the novel in particular and fictive imagination in general (what in the West takes such forms as “literature,” “art,” “aesthetics”...). Most explore his impact (often in their own artistic, political and scholarly work) on ideas and practices of language and culture; of decolonization of minds and bodies and personal, social and ecological well-being; of education and new non-hierarchical and transcultural pedagogies; of savagely centered social and political control (at their extreme, US and other carceral regimes) and decolonized freedoms for individuals and populations. The start lies in refusing murderous economies of slave trade, colonization and neoliberal exploitation and contest. The ongoing lies in creative ecologies of exchange, circulation and the knotted equalities, compassion and knowings of the infinite variety of the world’s cultures. For what threads all these chapters is that Ngũgĩ’s exile in the US has led him to develop one of the most potent conceptions of how a truly global reality of transcultural exchange among equal communities (what he now calls globalectics) may actively come to exist.

Timothy J. Reiss is Emeritus Professor at New York University. His latest books are Against Autonomy: Global Dialectics of Cultural Exchange, Mirages of the Selfe: Patterns of Personhood in Ancient and Early Modern Europe, and three earlier collections with Africa World Press. He is finishing a book on Descartes’ thinking as product of his age’s political practice and thought, and another on the European Renaissance as a stage in long continental and oceanic intercultural exchanges.