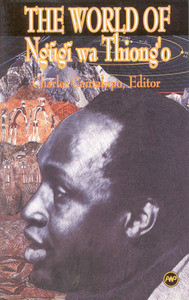 Inspired by the work of Ngugi wa Thiong'o, this collection of twelve essays, two interviews and poetry and photography, is a direct response to Ngugi's eloquent appeal to "move the center" and create a worldwide and truly democratic "pluralism of cultures, literatures and languages." The contributors represent no one critical school, party, age, or social group, nationality, race or genre. Furthermore, their works represent a plurality yet only a sampling of centers-- and by no means at all --to be found in the world of Ngugi's writings.

The World of Ngugi was Thiong'o surveys the wide variety of Ngugi's works, from the beginning to the most recent, including essays on all of his novels, books of essays and writings for children. Extensive discussions of Ngugi's writing in English and Gikuyu, his use of oral literary techniques, his tragic exile, his renowned visions of African, colonial and neocolonial history, his revolutionary and contemporary politics, his critical recognition that the quality of human relationships is always the center of his work-- a vision reinforced by the book's powerful images of Ngugi's world by Lawrence F. Skyes --and more, make The World of Ngugi wa Thiong'o the most up-to-date and critically distinguished collection of its kind.