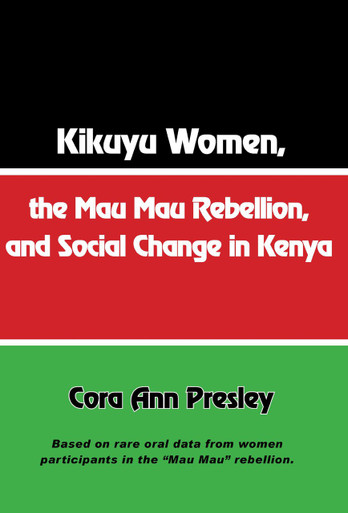 Based on rare oral data from women participants in the Mau Mau rebellion, this book chronicles changes in women's domestic reproduction, legal status, and gender roles that took place under colonial rule. The book links labor activism, cultural nationalism, and the more overtly political issues of land alienation, judicial control, and character of the colonial administration in an analysis of the impact of colonial policy on Kikuyu society, and especially its negative consequences for women. Dr. Presley argues that women's involvement in anti-colonial activities began during the World War I era when the state forcibly recruited women into a wage labor system characterized by physical and sexual abuse. Women took part in all facets of the increasingly violent nationalist movement, including serving in the guerilla army.

This book is an important addition to the Mau Mau debate, offering a careful exploration of the effect of colonial social policy on women and making a valuable, original contribution to the literature on African peasant women and their involvement with a major liberation struggle.

Dr. Cora Ann Presley is Associate Professor of African American Studies at Georgia State University. She received her Ph.D. in African History from Stanford University. Dr. Presley has taught African and African American History at Loyola University (New Orleans), Tulane University, and Humboldt State University. She has authored several works on African women and has received several prestigious grants. Dr. Presley has an ongoing interest in educational outreach. She has developed seminars and summer programs for secondary and elementary school teachers and has served as a member of the Board of Directors of the Amistad Research Center.