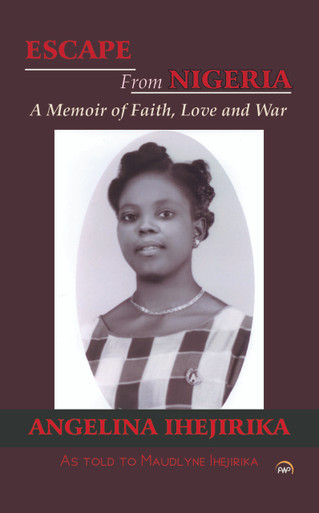 Escape from Nigeria: A Memoir of Faith, Love and War chronicles the eventful life of Angelina Ihejirika, her quest for an education, her marriage to Christopher Obani Ihejirika, her teaching career up until the hostilities against Igbos in Northern Nigeria forced her to return to the Eastern Region. When the Eastern Region seceded from Nigeria and became known as Biafra, Angelina and her children were marooned in war-torn Biafra, her husband far away in school at the University of Fourah Bay in Sierra Leone. For more than two years, neither Christopher nor Angelina could communicate with each other. Then an Irish nun, Sister Mary Thomas, discerned Angelina’s mood and soon knew what was gnawing at her soul. She then instructed Angelina to write a letter to her husband which she would smuggle to Christopher in Sierra Leone.

By the time the letter arrived, Christopher had left for the United States to begin graduate studies in finance at Northwestern University. There, not knowing the fate of his family totally overwhelmed him, seriously affecting his studies. His dean and mentor, Dr. Dietz, soon noticed and waded in. Thereafter, Dietz got a few friends together in a desperate effort to cheer Christopher up, but they soon realized that it was all in vain. They then embarked on the arduous task of locating Angelina and her six children (if indeed they were still alive) in Biafra and bringing them to the United States. To this end, they recruited more friends and raised funds by speaking at churches, synagogues, and to anybody who would listen, eventually raising enough money to pay for the escape of Angelina and her children from war ravaged Biafra to the United States.

"A riveting and heartwarming memoir, Escape from Nigeria: A Memoir of Faith, Love and War summons Angelina Ihejirika’s childhood in Nigeria, her early quest for an education, marriage, teaching career, uncommon courage and determination in the midst of a vicious civil war, and her eventual and miraculous escape to the United States. It is a love story, full of wisdom, pain and unwavering optimism, a testament to the resilience and ultimate triumph of the human spirit."
—Christine Oti Ohale, Ph.D., author of From Ritual to Art: The Aesthetics and Cultural Relevance of Igbo Satire

ABOUT THE AUTHOR
ANGELINA IHEJIRIKA, née Nwachukwu, has been educated in Nigeria and the United States. She was one of the foundation students of the prestigious Cornelia Connelly College (CCC), Uyo, run by Irish and American nuns. The Nigeria-Biafra war seriously disrupted her family structure, eventually necessitating her relocation, along with her children, to the United States. In the U.S. she enrolled in the College of DuPage where she earned an Associate’s degree in Early Childhood. She then transferred to Roosevelt University, Chicago, and graduated with a degree in General Studies. Her teaching career spanned more than three decades, from 1949 to 1984. In retirement, Angelina Ihejirika became involved in numerous humanitarian projects under the auspices of “Voice of a Woman for Humanity,” an organization she founded in 1999. Her spirit of selfless giving has found expression in her service to her family and humanity as a whole. At present, Mrs. Ihejirika divides her time between the United States and Nigeria, where she continues to oversee her humanitarian projects in her native Mbaise community. She has seven children all of whom live in the Chicagoland area with their families.