KEBRA NAGAST (THE GLORY OF KINGS): The True Ark of the Covenant transl./ed by Miguel F. Brooks (HARDCOVER) 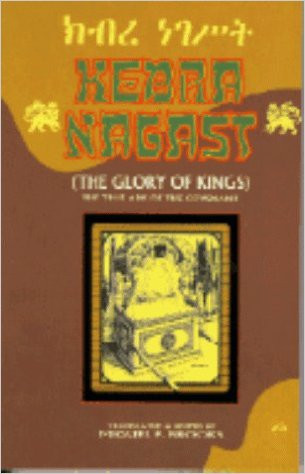 KEBRA NAGAST (THE GLORY OF KINGS): The True Ark of the Covenant transl./ed by Miguel F. Brooks (HARDCOVER)

Lost for centuries, the Kebra Nagast (The Glory of Kings) is a truly majestic unveiling of ancient secrets. These pages were excised by royal decree from the authorized 1611 King James version of the Bible. Originally recorded in the ancient Ethiopian language (Ge'ez) by anonymous scribes, The Red Sea Press, Inc. and Kingston Publishers now bring you a complete, accurate modern English translation of this long suppressed account. Here is the most startling and fascinating revelation of hidden truths; not only revealing the present location of the Ark of the Covenant, but also explaining fully many of the puzzling questions on Biblical topics which remained unanswered up to today.

"...(O)nly in the Kebra Nagast, and not in the Bible...the bold assertion is made...that the Ark had gone from Jerusalem to Ethiopia." "...(H)ow could the most important Biblical object in the world end up in the heart of Africa...? The Kebra Nagast...with a great deal of weight and historical authenticity...offers a clear answer to this question...as Ethiopia's claim to be the last resting place of the lost Ark remains unchallenged..." "...(T)he Kebra Nagast's audacious claim of a massive cover-up...(and) all information about the tragic loss of the Ark during Solomon's reign had been suppressed, which is why no mention is made of it in the Scriptures." "...a great epic...a remarkable document ...erected above a solid foundation of historical truth."

Dr. Miguel F. Brooks is a teacher, author-publisher, biblical scholar and researcher. Born in Panama of Jamaican parents, he received his early training in sciences, literature, philosophy and medicine. A graduate of the Instituto Istmeno in Panama and Universidad de Carabobo in Venezuela, he is member of several academic and philosophic societies and holds a B.Sc. degree in General Sciences and a Ph.D. in Psychology.

A trained interpreter and translator (English, Spanish, Portuguese), Dr. Brooks is an ordained elder and lay preacher in the Seventh-Day Adventist Church, and is currently engaged in biblical and historical research in prophetic interpretation and Old Testament exegesis.