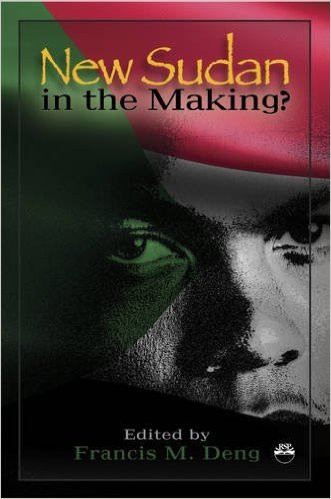 "New Sudan" is a concept for radically reforming Sudan s governance system by addressing the national identity crisis that has been responsible for the wars, the instability and the failure of the national building project that have afflicted the country since independence. The gist of the crisis is that the dominant Arab group, which is in fact an African Arab hybrid and a minority, perceives the country in its image as an Arab-Islamic nation. This inevitably discriminates against the non-Arab and non-Moslem populations in the South and even against the other groups in the peripheral regions of the North, who even though are predominantly Moslem, are however not Arabs.

The South, one third of the country in territory and population, was the first to rebel against this discriminatory framework in August 1955, only a few months before independence on the January 1, 1956. That rebellion which escalated into a 17 year war was separatist, but was resolved in 1972 by a compromise that granted the South regional autonomy. The abrogation of that accord in 1983 led to the resumption of the second rebellion by the Sudan People s Liberation Movement and Army (SPLM/A) that called for the unity of the country in the framework of a New Sudan in which there would be full equality of citizenship, without any discrimination based on race, ethnicity, religion, culture or gender.

The vision of the New Sudan was largely that of Dr. John Garang de Mabior, a man who was a scholar, a soldier, and a statesman. When he arrived in Khartoum to be sworn in as First Vice President of the Government of National Unity and President of the Government of Southern Sudan, in accordance with the Comprehensive Peace Agreement of January 9, 2005, he was met by a rallying crowd estimated in the millions, clear evidence that the New Sudan was in sight. Tragically, two weeks later, Garang died in a helicopter crash. To some, the vision of the New Sudan died with him. To others, his legacy, including the New Sudan Vision, has been ironically rejuvenated, particularly in the North. But will it be realized or will it remain a dream and an elusive goal? That is the very essence of the question mark in the title of this book.

Francis Mading Deng is the United Nations Secretary-General's Special Advisor on the Prevention of Genocide, a position to which he was appointed in 2007. Earlier on he had served as Sudanese Ambassador to the Nordic Countries, Canada, and the United States, as well as the country's Minister of State for Foreign Affairs.

Dr. Deng holds an LL.B (Honors) from Khartoum University and an LL.M and JS.D from Yale University and has authored and edited over thirty books in a wide variety of fields, including law, conflict resolution, human rights, anthropology, biography and fiction and folklore. His first book, Tradition and Modernization: A Challenge for Law among the Dinka of Sudan, received the 1972 prestigious Herskovits Prize awarded by the African Studies Association.